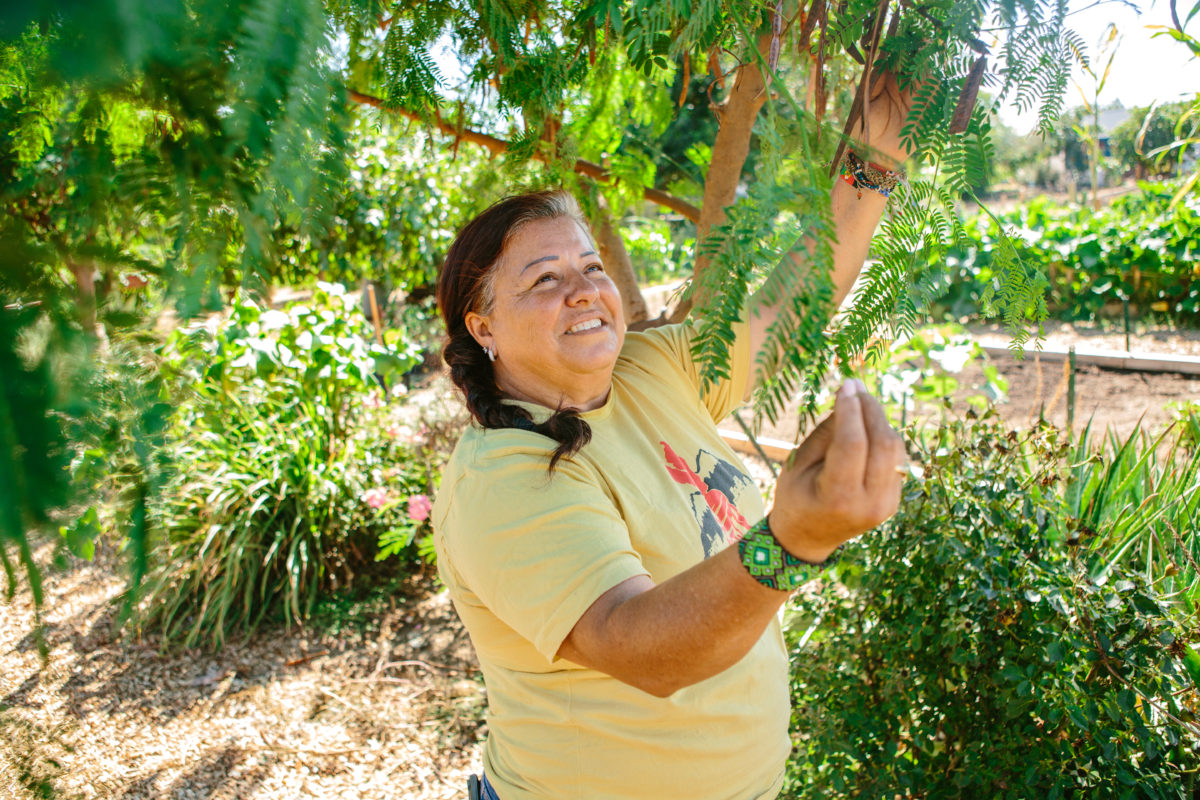 Like many moms, Maria Alonso of Ontario, California will do whatever it takes to help her children succeed. When her son Pablo was struggling in school, she took him to a doctor, and in 2010, Pablo was diagnosed with ADHD. As much as she wanted to help her son, Maria was hesitant to put him on medication. What she didn’t know then was that a community garden would prove to be the answer she needed.

“I’ve never taken medication like that in my whole life and it was something really foreign to me,” says Maria, a 54-year-old mother of three. Luckily, the doctors presented an alternative option for Maria—feed her son an all-organic diet.

But finding organic food in her long-time home of Ontario—an arid city 35 miles northeast of Los Angeles in San Bernardino County—was no easy task. Maria traveled to all of her local supermarkets to no avail. Even stores that advertised an organic selection only offered one or two items—not enough to completely transform her son’s diet. But Maria wasn’t willing to give up. If she couldn’t find the food at her local stores, she would plant it herself.

In 2010, Maria founded the Huerta del Valle (Garden of the Valley) community garden, where Ontario residents have access to small plots of the land to grow their own crops. The four-acre garden and farm is just off a main street, across from a park.

“I had seen the space before and it had always been abandoned,” Maria says. “There’s a lot of vandalism there, people who are living in the streets would sleep here.”

Eight years later, bright murals have replaced graffiti and the smell of growing guavas has replaced the scent of trash. A small arch and walkway welcome visitors to step inside the lush grounds. Picnic tables sit under a canopy of trees where children gather for youth activities. Volunteers bustle about picking plastic waste out of compost piles and organizing jars of locally produced honey and jams to sell.

The front part of the community garden is filled with roughly 60 individual garden plots maintained by Ontario residents. The back part is the farm, where employees and volunteers grow food to sell. They offer weekly CSA (community-supported agriculture) boxes for $25, or $17.50 for those that qualify as low-income. They also accept food stamps as payment. This week’s haul includes apples, tomatoes, eggplant, sweet potato greens, mint, green onion, celery, kale, and radish.

“So many people are living a whole family in a room, renting apartments where they don’t have control over the land, so they can’t grow their own food and it’s really expensive, especially if you’re looking for organic,” says Arthur Levine, the garden’s Project Manager. “This [community garden] creates conditions where people can have their own food, where they can grow it themselves, they can eat fresh, they can eat the highest quality stuff.” 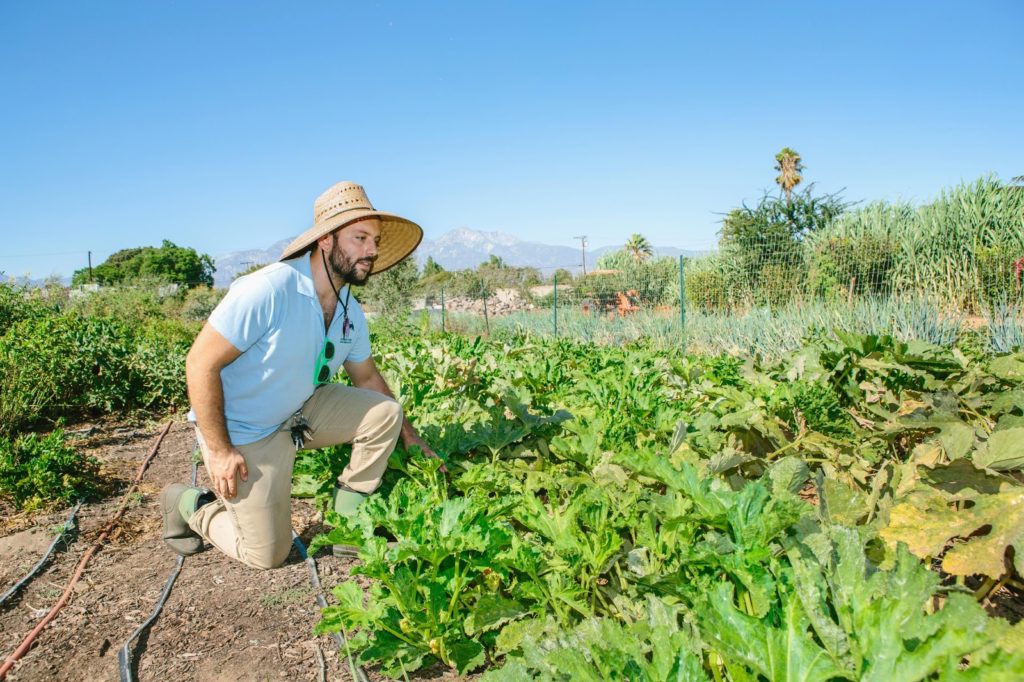 Arthur has been instrumental in helping the garden receive funding to maintain its positive impact on the community. Originally, the garden received funding through Kaiser Permanente’s healthy eating initiative. But Huerta del Valle workers realized that their work not only made their community members healthier, but that it also had potential to promote environmental health. Composting helps reduce greenhouse gases by diverting waste that would typically wind up in a landfill. Instead of rotting and turning into methane, farm workers can turn their compost into soil and use that soil to grow even more food.

“We already compost here on a fairly small scale to satisfy our needs on site, but the whole basis of our TCC application is to recycle organic waste from the city to make a lot more soil,” Arthur explains. “We will collect more food waste that’s not already being collected or food waste that is being collected but being sent to another city.” They also plan to start picking up food waste from 100 households.

Arthur became involved with Huerta del Valle while he was studying at nearby Pitzer College. He’d previously worked in New Orleans after Hurricane Katrina and saw firsthand how environmental justice and food access is linked to systemic racism and social justice. Arthur appreciates how the garden creates food sovereignty and allows the area’s Hispanic and immigrant communities to connect with their culture.

“So often immigrants are forced to assimilate in order to survive and their kids do the same and the indigenous knowledge, the culture, is lost,” Arthur says. “A place like this also has something to do with preventing that loss of cultural diversity.”

That’s certainly been the case for Andres Viccario, a soft-spoken 36-year-old garden volunteer-turned-employee.

“I really like being here because you see things grow. You see the fruits of your labor,” Andres says. “You put in the work and you see the results of it.”

Andres grew up on a farm with his brothers in Mexico. His family grew food and cared for the land, but he left farming behind when he came to the U.S. in the late 1990s.

“By coming here I really moved away from agriculture and I began to forget things like how to grow,” Andres says as he sets down a tray of bright raspberries. “But when I came to the garden and I started growing in my plot, my mind started to change and all my knowledge started to come back.”

Andres introduced one of the garden’s most beloved crops to the community: papalo, an herb similar to cilantro. He shared seeds from his plot with the rest of community. Now, papalo plants are found throughout the community garden and farm.

Huerta del Valle has helped Ontario resident Andres Viccario return to his roots in farming and share them with his son Jacob.

Andres not only gets to reconnect to his farming skills, he’s passing them along to his five-year-old son, Jacob. “It’s really special to see a kid who’s here in this environment and see how he grows and how eating fresh fruits and vegetables and being involved, touching the soil is natural to him,” Arthur says.

The community garden remains special to Maria’s son, Pablo, as well. While Maria’s modest plan to overhaul her son’s diet transformed into a community project with wide-reaching impact, she still recalls the big difference it made in her life. Just three weeks after feeding Pablo an all-organic diet, she saw drastic changes in his behavior.

“Having had been so frustrated with everything that he was going through for so many years, I thought that maybe it was just my imagination that he was getting better. But it was confirmed for me by his teachers. They called to say the medication must be working, but actually it was something else,” Maria recalls with a smile as she munches on some of Andres’ fresh papalo leaves.

Now 18 years old, Pablo has graduated from high school and is considering a career in the armed services.