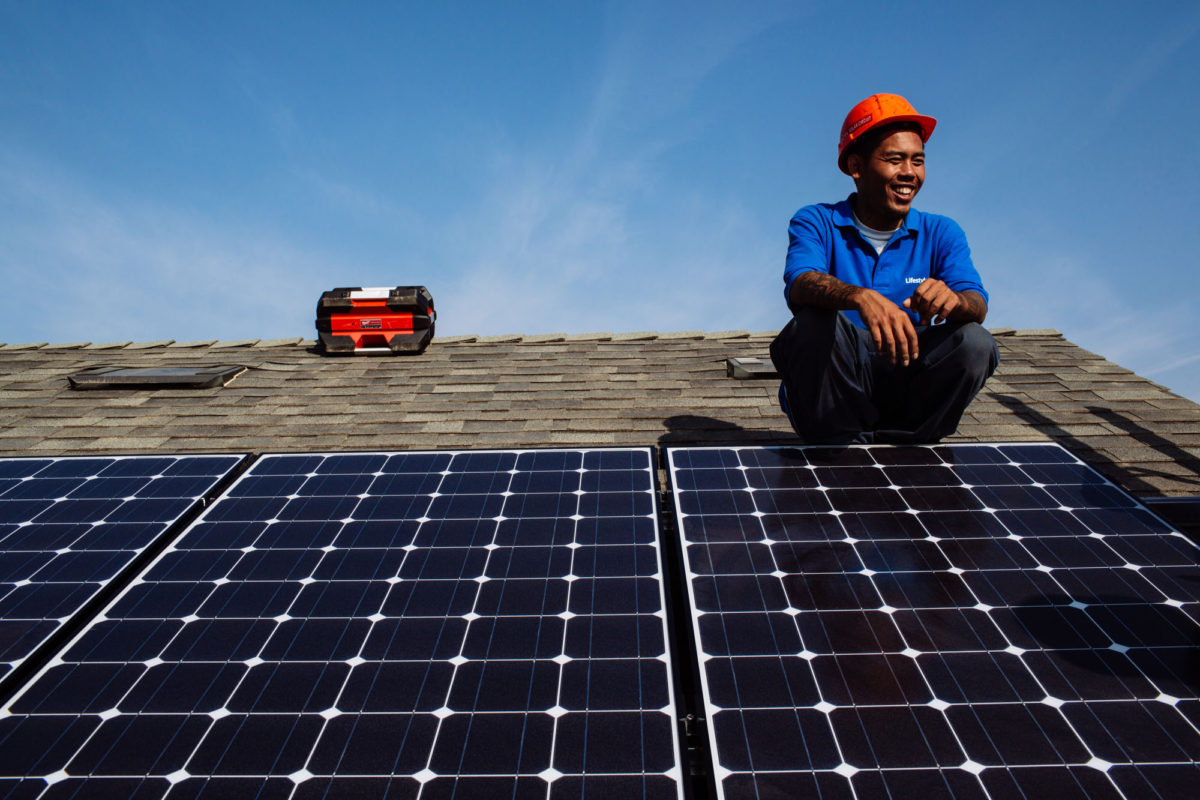 A six-month internship with GRID Alternatives led Denny Sysaknoi, 21, to a position as a crew leader with Lifestyle Solar, a Central Valley solar installer.

Once headed for trouble, a young man builds a new life as a solar installer.

Denny Sysaknoi grew up in Fresno, fending mostly for himself. He seemed headed for trouble until California’s growing clean energy economy helped him turn his life around.

“I grew up in a neighborhood that was violent, and there were always shootings around. I grew up with no parents. My grandmother raised me. Nobody worked in my house,” he explains.

Denny’s brother, a gang member, was 15 years old when he went to prison in Oklahoma for a shooting in Fresno. He’s still there. Denny was also arrested when he was 16 for possessing an unregistered firearm. He said he bought the gun for protection at a gun show at the Fairgrounds in Fresno. He was in jail for a week and then the charges were dropped.

Now, Denny’s 21, and he’s standing in the garage of a home in Madera, about 25 miles north of Fresno, where he just finished installing a rooftop solar system. His life is going a different way than his brother’s.

“I want to change my life, to stay out of trouble, to finish school,” he says, looking down at the cement floor. Tattoos cover his dark arms and peek out through his collar, probably covering his full torso. He has a dragon on one arm and what looks like a lily or conch shell on the other. These days, just about everyone has a tattoo or two, and Denny in his blue polo shirt basically looks like a young man dressed for work. But he says he regrets the tattoos. “People judge you when they see them. They think, ‘oh, he’s not going to work.’”

He speaks softly but openly. “You can ask me anything,” he offers, knowing how difficult it can be to probe into a painful past. “When I was growing up, I was getting in trouble in school. I got kicked out of school. My father told me I was not ever going to be anybody.”

After his arrest, Denny made a crucial decision to enroll in vocational training for young adults through Fresno’s Economic Opportunities Commission (EOC). EOC sent him to GRID Alternatives, where he did a six-month internship which eventually led him to a position as a crew leader with Lifestyle Solar, a Central Valley solar installer. 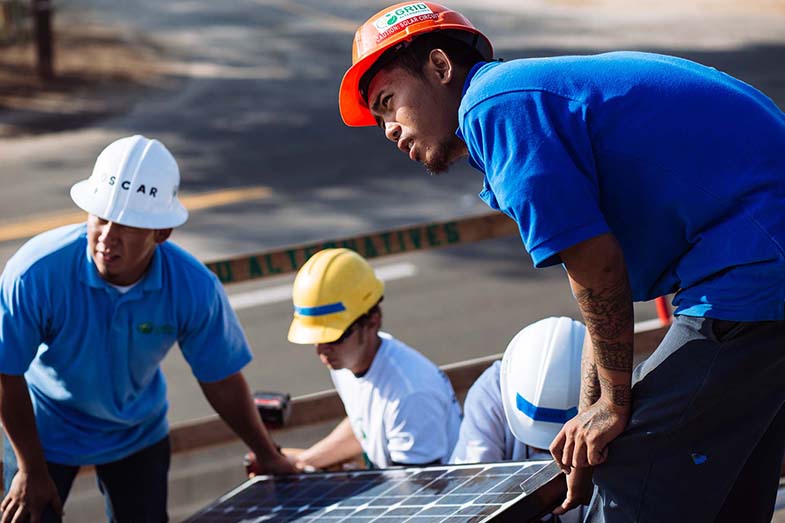 Denny, working with his crew at Lifestyle Solar, installs a 3kW rooftop solar system on a low-income home in Madera.

GRID Alternatives Central Valley leads teams of volunteers and job trainees in installing solar electric systems for low-income families, from San Joaquin County to the north through Kern County in the south. The program helps families save on energy costs while giving workers hands-on experience to help them find jobs in the green-tech economy. GRID projects are funded in part through SASH (California’s Single Family Affordable Solar Homes program.)

Thanks to California’s climate and clean energy laws, programs like SASH are growing, helping more low-income families save money and opening career paths to more young people like Denny. Policies that charge polluters and put that money to work expanding clean energy mean that jobs in solar and other clean energy industries will grow significantly.

Lifestyle Solar hired Denny as soon as his GRID internship finished, and he has done 100 jobs in two and a half months. He makes $10 an hour now, but he’s brand new and his pay will go up as he receives more technical training. The money is necessary, but there’s also something else about his job that for Denny runs a little deeper.

When he’s up on the roof, lifting panels into place with his crew, he’s focused and fast at his job. The solar panels come up and fit in like pieces of a puzzle. It goes together quickly, and the guys work together seamlessly.

“You can tell when I come to work that I like it because I don’t think about anything else,” he says. “On days when I don’t go to work, or I get done early, I think… ‘I wish I were at work.’ I start to think about people who have passed away. I start to hang around with friends who are not working.

“Now, I like being around stuff like this,” he says, gesturing to the crew and the families of the homeowners all standing next to the solar panels. “I like doing solar because the homeowners are so happy. It feels good after the day is done.

“If I go back to my neighborhood, it’s negative,” he reflects. “I don’t want to go back, but it’s always something to remember. My brother is in prison for 10 years. His son is growing up without him.” Denny’s father is now raising Denny’s nephew. Maybe he’s trying to make up for not being there before, Denny says.

Denny now has a six-month-old baby boy of his own. The baby’s mother is from Long Beach, and they live together in Fresno. “What I want most for my son is being there for him,” Denny says.

The folks at GRID are betting on him. “Denny has sticktoitiveness,” says Tom Esqueda, GRIDS’s Central Valley Regional Director. “Less than 12 hours after he left GRID, he got a job with Lifestyles.” (Lifestyle recruits a lot of its workers from the GRID volunteer ranks).

I ask Denny if his grandmother is proud of him for doing the solar job.

“Grandma knows I’m working. She doesn’t really know what solar is,” he says. But his brother behind bars in Oklahoma knows what it is, and Denny’s life seems in sharp contrast. Denny speaks of his brother tenderly and sends him money he earns at his new job. “He looks up to me,” Denny says, pausing. Then he adds, maybe thinking back on his father’s words, “You can be somebody no matter what.” 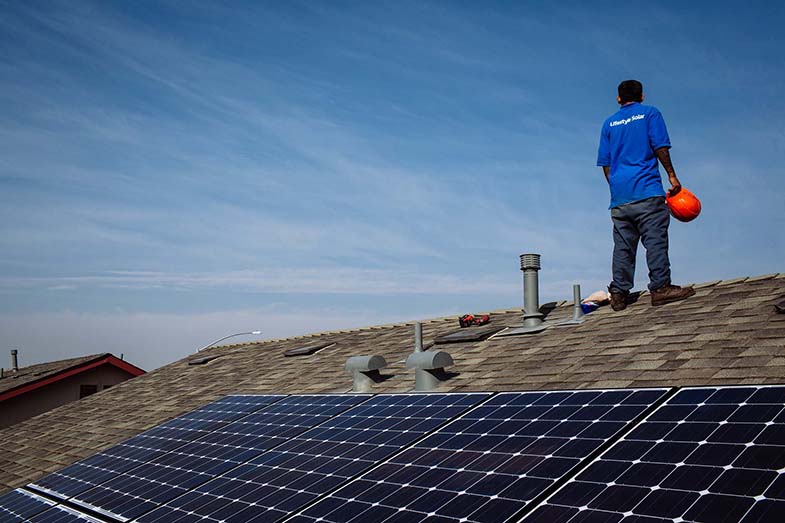 Leaving behind a violent community and difficult upbringing, Denny made a brave choice to pursue a skilled and satisfying vocation and life. The growth of California’s solar industry opened that door for him.