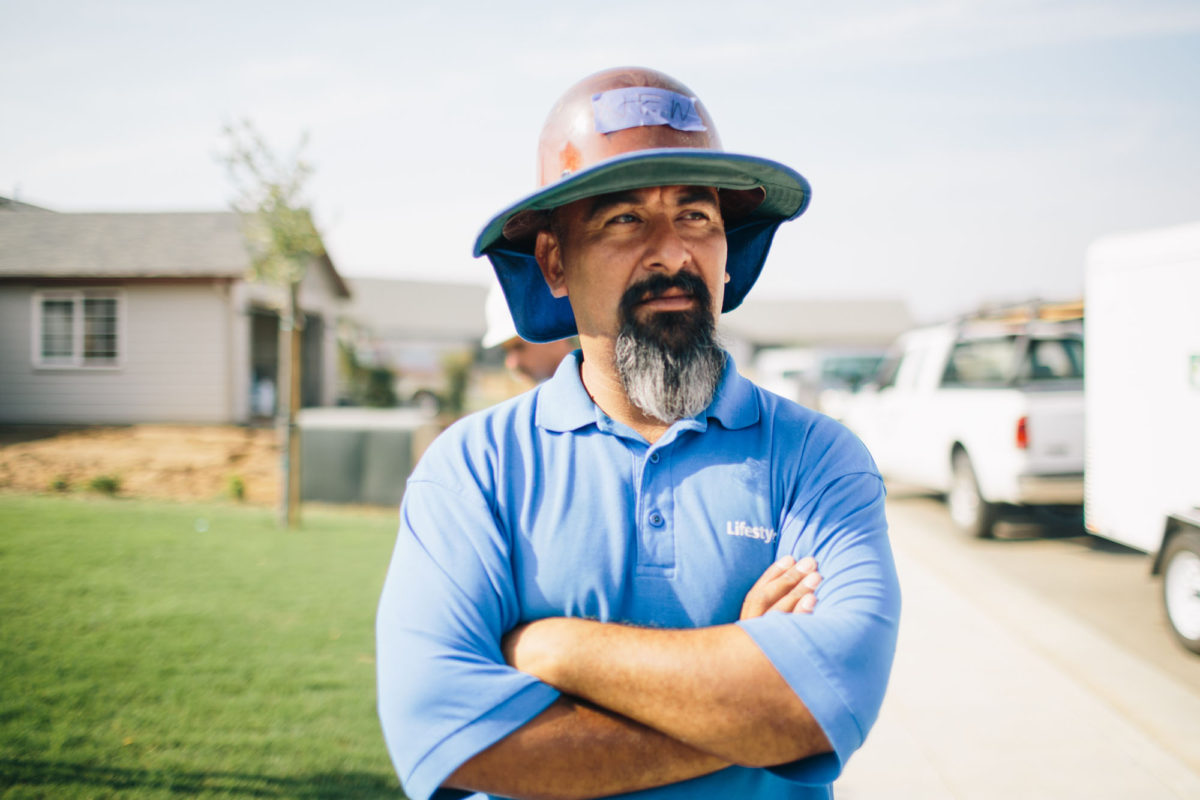 Jesse Magallanes runs a crew of solar installers for Lifestyle Solar based in Fresno.

“I don’t really like working inside buildings,” said Jesus Magallanes, who goes by Jesse. He’s still in his hard hat and standing in the front yard after finishing work on a 3kW rooftop solar installation on the home of Gerardo and Leticia Ramirez in Madera, California.

From the peak of the Ramirez roof you can see a thin film of dust, pollution and haze that floats on the sunlight just above the ground as you look out across the subdivision. A goat lies in a completely barren dirt yard across the street and a man in a straw cowboy hat wanders up the sidewalk next to a chain link fence and an abandoned lot. You can also get a good view of the roofs of several modest houses equipped with solar panels on the next street over.

Jesse is stout, with large, muscular arms that hoist and carry dozens of solar panels a day. He wears a wide canvas brim attached to his hard hat to protect against the intense Central Valley sun that allows so much produce to flourish in this large agricultural region.

Before he went into training for solar, Jesse worked in construction. “It took a big old hit with the economic downturn,” he explained. When construction work thinned out, he was doing odd jobs to get by, going to packinghouses, driving a forklift. He had four or five minimum wage jobs at a time, all small.

It was also impossible to make ends meet. “I was making $300 a week and I had to move back into my parents’ house in Visalia,” he recalls. While he helped his parents out with rent, he lived there for three years while working multiple jobs and looking for better opportunities.

Then he heard from a few friends that there were a lot of new positions in the Valley installing solar. “I found out that there were all these government programs to help out homeowners finance solar and make it easy for people to get it,” he said. And he decided to seek out training.

There are a lot of reasons to celebrate the proliferation of solar here. It means good jobs in the growing clean energy economy for Jesse and many others. Additionally, people working and living in the Valley, one of the most productive agricultural regions in the world, are susceptible to asthma and heart conditions associated with pollution at alarming rates, according to the American Lung Association. On a broad scale, more solar means less pollution. It also means significantly lower energy bills for people like Gerardo and Leticia, who work long hours and are raising four children on a small income.

Jesse went through solar installation training at Proteus Inc., a local technical school. While he was training with Proteus, he did over 100 hours of volunteer work with GRID Alternatives and became a team leader there. GRID projects are funded in part through SASH, California’s Single Family Affordable Solar Homes program – a program that’s now expanding thanks to California’s climate justice and clean energy laws. Because of this hands-on experience and training, Jesse was able to secure a job at Lifestyle Solar, where he is now a crew leader.

“Now I’ve got my own crew and I just bought a $250,000 house, which I could never have afforded before,” Jesse said. He’s 39 and recently married. He has three kids and his wife has three, so together they have six. That’s a lot of people to take care of, but he also runs his own sideline business cleaning solar panels. Lifestyle doesn’t mind if he hands out his business card on the job.

Jesse was born in L.A. but moved with his parents to Visalia when he was 17. His new house is in the same neighborhood as his parents and his mom takes care of his kids while he’s at work. His parents just returned from a vacation in Peru, which Jesse and his sister gave them as a present for their 40th wedding anniversary

He feels optimistic, with a new home and a new marriage. He rented the biggest hall in town and 300 people plus kids came to his wedding. “I would not have had such a nice wedding if I was still in the packing houses and digging trenches,” he reflects.

As a crew leader, he’s worked with six or seven GRID volunteers, he said, and trained them on his crew. They are all young guys who may be hired by Lifestyle and advance to crew leader as he did, or even find more technical positions elsewhere. The crew from GRID and from Lifestyle is a diverse group with a bit of an edge, some with tattoos on their arms and others with plugs in their earlobes. Many had looked for jobs in the area or worked a variety of low-wage jobs before they found this opportunity for training and work.

They are funny, kind and patient—all of them teachers. “No moonwalking on the roof,” GRID’s Oscar Mendez pleaded during the safety training.

Jesse and his crew just finished a 200-panel job, the roof of a large church. He says he can do 60 panels in a day with his crew. “I’m the oldest on the crew, so that’s why I have to push,” he jokes.

“I love my job,” he said. “While we do the same thing all the time, each house is a little bit different. I learn something every day. … how to service the panels, how you wire stuff.” Jesse feels like solar is going to continue to offer him more opportunities to grow his career and help his family thrive. It definitely has so far.