San Diego County’s close proximity to the U.S.-Mexico border can cause its share of problems, and the small enclave of San Ysidro is no exception. This low-income, predominantly Mexican-American community is wedged against the border fence and the busiest Port of Entry in the United States, if not the world. Among other things, that leads to air quality issues.

Approximately 50,000 northbound cars loaded with passengers from Mexico pass through the border crossing daily, at all hours. Many of those vehicles idle in traffic, spewing fumes into the atmosphere as they wait. In the coming years, the number of cars stuck in traffic is expected to double due to planned expansion of the border facilities where San Diego County meets Tijuana, Mexico.

Not satisfied by what they saw as a lack of concern on the part of the federal government, the residents of San Ysidro prompted the community development organization Casa Familiar to conduct an investigation. Thanks to California Climate Investments – the money we collect from polluters to put into projects promoting clean air and fighting climate change — what began as a local effort to hold state and federal transportation officials accountable is now part of a statewide data-gathering campaign to measure air quality in low-income neighborhoods.

It wouldn’t be possible without the dedication of David Flores, who coordinates Casa Familiar’s air-quality monitoring program. After 18 years working on behalf of the organization to provide safe, affordable housing for the border community, he’s now turned his attention to obtaining answers.

Soft-spoken and wearing a button down-shirt, Flores isn’t a stereotypical activist.
In fact, he considers himself an inadvertent environmentalist. “If you had asked me 20 years ago would I’d be doing this kind of work in the community, I would have said that you’re crazy,” he says.

An architect by training, Flores is the public face of a project designed to measure air pollution in the border town. Unlike mining or deforestation where the degradation of the environment and ultimately to human health are apparent, the long-term effects of living near freeways are far more insidious.

Flores asserts that preliminary findings show a clear link between health issues currently affecting the community and the volume of traffic at the border crossing. With wait times anticipated to rise, the residents of San Ysidro want additional safeguards.

“Eventually, I think we will have enough data to make the case that the delay in traffic border crossing has a direct correlation to local air quality,” he says.

This much is undisputed: Childhood asthma rates are 18 percent higher in San Ysidro than the rest of the county.  And a series of regional studies on traffic patterns along the U.S.-Mexico border has established a link between respiratory disorders and car exhaust. In addition, Flores notes that prior research has shown San Ysidro’s pollution levels were up to 10 times higher than Imperial Beach, a coastal community located six miles to the west.

The likely source of that pollution is visible from The FRONT, Casa Familiar’s arts and culture gallery. Within view of the low-rise building are the I-5 Freeway with the border fence and the network of roads leading into and out of Tijuana, a city of 1.3 million people, looming in the distance.

“We’re a triangle of freeways,” Flores says. Three arteries of southbound traffic converge on the gateway between the United States and Mexico at all times of the day. 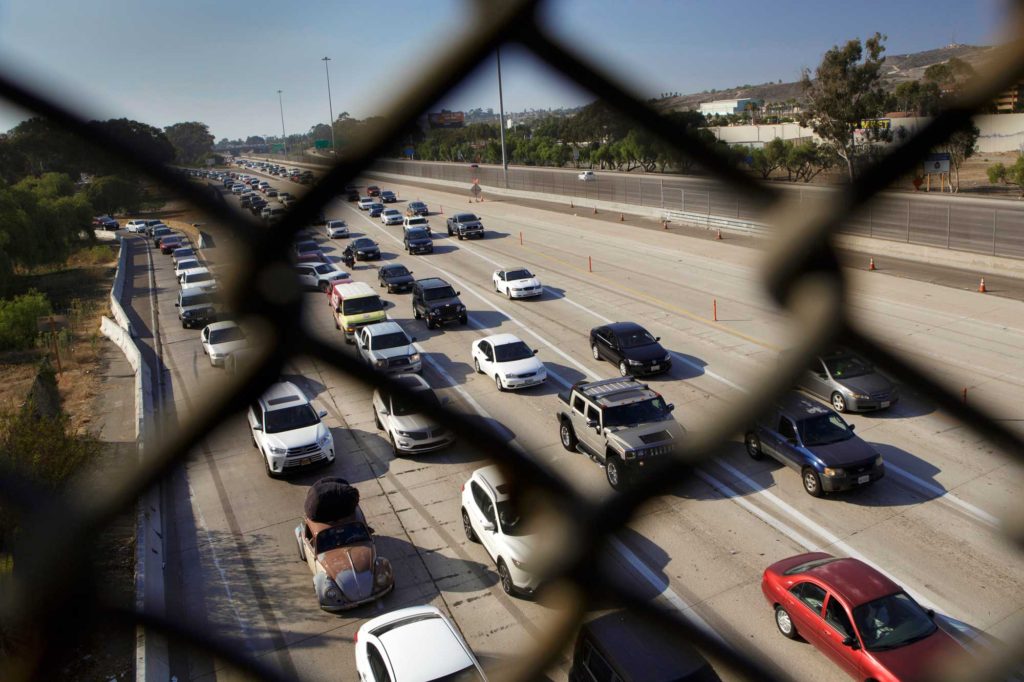 In California, officials have warned against building homes within 500 feet of freeways, due to health concerns, and with good reason. People who live in close proximity suffer from higher rates of asthma, heart attacks and premature birth. Recent studies have added more health problems to the list, including childhood obesity and autism.

This toxic burden often falls predominantly upon low-income Latino communities living beside the border in metropolitan areas like San Diego, El Paso and along the Rio Grande River Valley in Texas. And San Ysidro is no exception.  The residents of San Ysidro are predominantly Latino, with a median household income of $44,000 a year, roughly two thirds of California’s median.

The San Ysidro monitoring project began in 2016 with input from residents and technical assistance from academics and staff scientists at the California Environmental Protection Agency (CalEPA). Technicians installed thirteen air quality sensors on rooftops dotted around San Ysidro and the vicinity.

This June, Casa Familiar secured a $500,000 grant from the California Air Resources Board to replace the existing sensors and to expand upon the network to measure both indoor and outdoor pollution in the surrounding South Bay area. 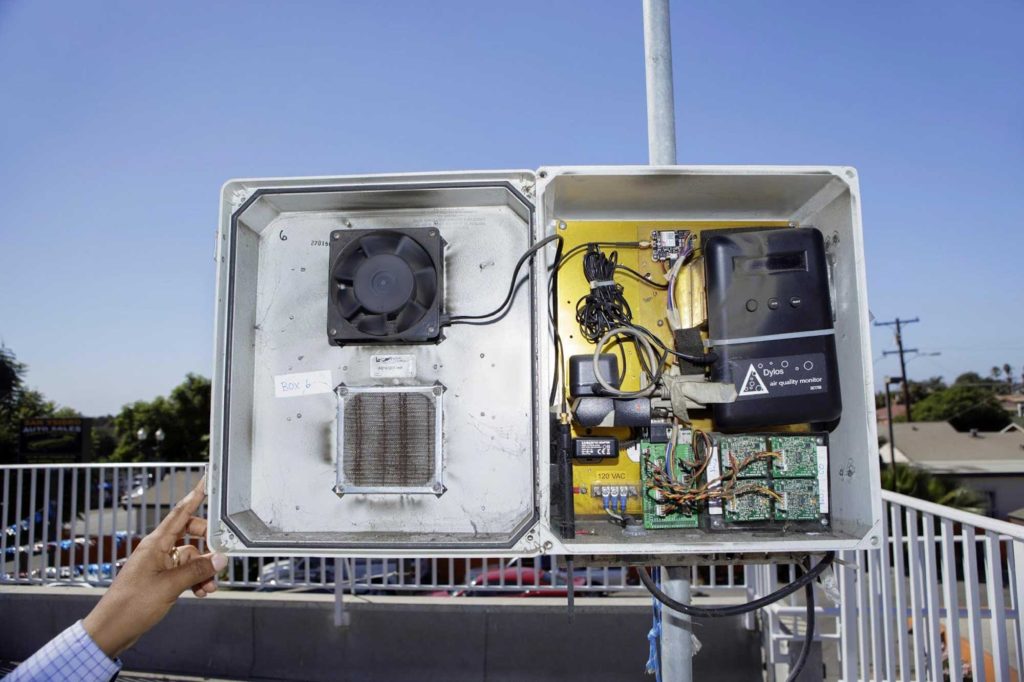 Researchers aim to collect information vital to the health of San Ysidro residents. Now in its third year of operation, the project is beginning to yield results.  “We’re very proud of the fact that we’ve been able to establish a network of sensors in a community that had no data, which is reliable be and regarded as research quality,” Flores says.

According to Flores having access to accurate information is a crucial step for enhancing CalEnviroScreen, a mapping tool overseen by CalEPA. State officials use CalEnviroScreen to identify communities impacted by the cumulative effects of poverty and pollution, including exposure to pesticides, air and groundwater pollution, ozone, particulate matter and other pollutants.

The latest grant was awarded under the provisions of AB 617, legislation enacted to create community-based programs designed to improve air quality at the local level. Officially known as the Community Air Protection Program, CARB issued $10 million in grants to nonprofit organizations and tribes across California, funded with proceeds paid by polluters under California’s climate and clean energy laws.

The San Ysidro project is modeled after a similar community-led program based in Imperial County, where rural residents are collecting particulate data gleaned from a network of 40 sensors throughout the Imperial and Coachella Valleys and areas bordering the Salton Sea.

Flores hopes findings from the study will open the door to additional funds for greenhouse gas reduction programs from the state’s cap-and-trade program. This will enable the community to take the next step and go from monitoring air pollution to actually reducing its impact.

“Like it or not, everybody has to do their part,” Flores says.