Island Village Apartments in San Diego. Thanks to money paid by polluters, this entire complex for low-income renters is getting an energy efficiency retrofit.

A serene courtyard belies a scene of controlled chaos at the Island Village Apartments. Floor-by-floor, hall-by -hall and door –to-door, a six-person team of installation technicians is methodically sweeping through the apartment complex. They’re replacing outmoded appliances and fixtures with low-flow faucets and energy -efficient lighting fixtures, turning the apartment’s hallways into a staging area for a blur of activity. 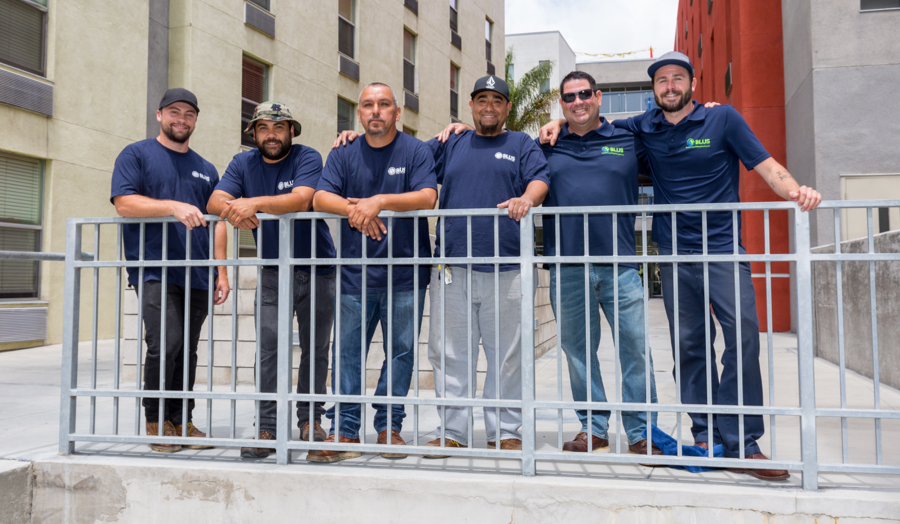 Located south of downtown San Diego, in the transitioning neighborhood of East Village, the apartment complex needs some TLC. And the work crew is there to provide it.  The retrofitting project isn’t a starry-eyed version of reducing carbon emissions by saving a rainforest, but rather, a textbook example of nuts-and-bolts environmentalism in action, offering a snapshot of green collar jobs that can lead to a middle-class lifestyle in the process.

Rudy Pico, senior project supervisor for Bottom Line Utilities Solutions (BLUS), based in Laguna Beach, California, walks the grounds of the 280 -unit apartment complex at a brisk pace, while rolling off the names of his crewmembers. His role is to pay close attention to dozens of small tasks that need to be accomplished by the end each day and to keep the retrofit project on budget and on time.

Pico stops just long enough to tell the crew members to stay on task, and reminds the reporter to keep up.  “I walk up to fifteen miles per day on this job,” he says.

He rattles off the names of the locations that he and his colleagues at BLUS have completed in recent weeks, including recent jobs in Stockton, California and Studio 15 in Imperial Beach, San Diego.  “We provide a number of energy-efficient solutions statewide and across the country,” he says.

Meanwhile, the crew has to be discrete as they move about the apartment complex. Most of the tenants are pleased with the installation of new appliances, and also a bit surprised that BLUS employees are on the premises to provide a valuable service at no cost to them.

Built in 2003, Island Village apartments are restricted to renters whose incomes fall 50 percent below the median area income of $79,000 annually. The nonprofit organization San Diego Community Housing Works, which provides affordable housing for low-income residents throughout the San Diego area, manages the complex.

“In addition to our mission of providing housing to our ‘at risk’ homeless and veteran population, we also aim to have the smallest carbon footprint possible,” writes Jonathan Roper, the building’s owner. In order to accomplish this goal, they partnered with the state of California’s Low Income Weatherization Program (LIWP).

The $38 million allocated to the LIWP came from California’s climate and clean energy laws, which charge polluters for the emissions they put into our air. By law, 35 percent of those funds must go to projects that promote clean energy and energy conservation in communities hit first and worst by pollution, climate change, and economic stagnation – often low-income communities of color. These projects improve the quality of life for the residents, clean the air and create jobs. To learn more about how California’s Low Income Weatherization Program is reducing greenhouse emissions in low-income multifamily households, click here.

Energy advocates call the upgrade at Island Village unique because it takes into consideration the needs of low-income households and the need for greener buildings. “This is a whole-building program that looks at energy efficiency and energy generation,” said Sarah Hill, LIWP Program Coordinator at the Association of Energy Affordability, a nonprofit organization responsible for implementing the LIWP program.

The Island Village retrofit is the first step in a two-stage process designed to significantly reduce the building’s carbon footprint. Next comes the installation of 170kW solar system designed to meet the building’s energy needs. Done in tandem, the overhaul should result in energy savings of 25 to 40 percent and to a reduction of greenhouse gas emissions over the lifetime of the building, reducing emissions by 150 metric tons of carbon dioxide annually, Hill explains.

A popular rallying cry of the recent People’s Climate March was “to change everything you need everyone.” In California, there’s a growing awareness among stakeholders that the communities of color that represent the state’s majority need to be included under the big green tent.  “Environmental justice permeates all of what we do, as environmentalists that focus on buildings that house low-income residents,” Hill says. 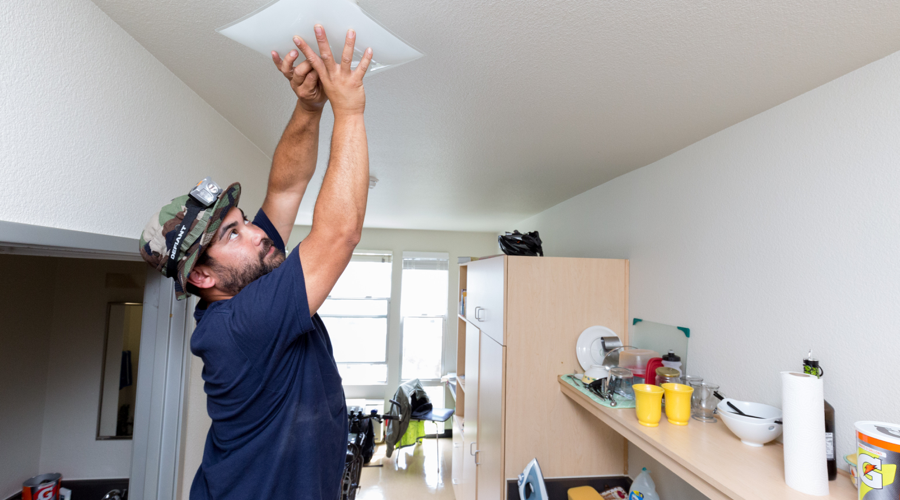 The BLUS crew is a part of that equation. For example, BLUS’s latest hire, Bobby Zimmer has the job of replacing overhead light fixtures with energy-efficient LEDs. The task is no small undertaking, given that he’s going door -to-door, eight hours a day, over the course of a 40 plus hour workweek.  He’s in and out of each apartment within minutes, before moving onto the next task.

Still, you can see Zimmer’s enthusiasm for the quick pace and the physically demanding aspects of the job. As far as Zimmer is concerned, he’s climbing the rungs to economic success two steps at a time. Up to this point, he had held a series of dead-end jobs that led nowhere, saying, “I felt as though I needed to get on with my life.”

A lifetime resident of Santa Ana, he was even more pleased with his new career path when he discovered that his starting wage was $15 dollars per hour, three dollars above his previous wage.  At BLUS, he says he feels as though he’s found a new home and not just a job. “I’m glad that I’m part of a team, where people treat you like family,” he says. 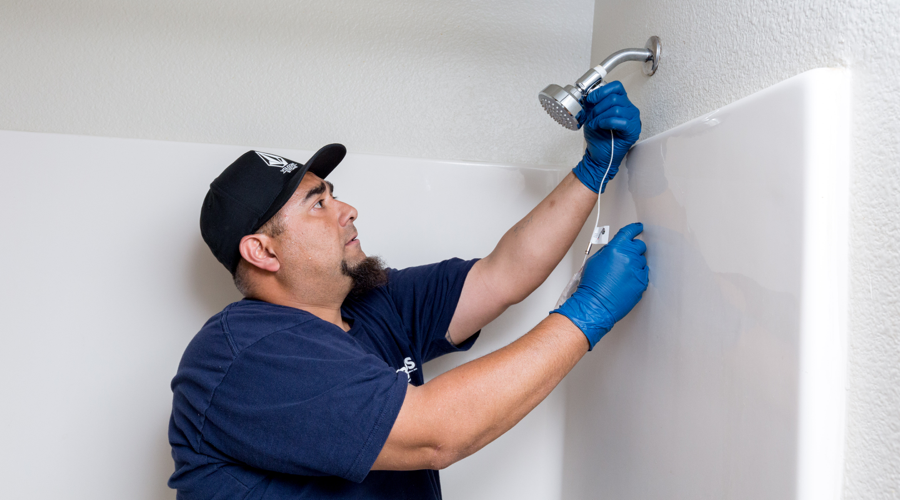 Heriberto ‘Beto’ Soto installs a low flow shower head, one of over 280 now in place at Island Village Apartments.

From his perch atop a stepladder, he’s not quite sure where this job will take him, but he can see the type of future that he’d like to build. His co-worker Heriberto ‘Beto’ Soto joined BLUS about three years ago.  And during that time, he’s managed to save enough money to purchase a house for his wife and family in Riverside County.

He’s also been on the job long enough to appreciate the wider implications of what the retrofit project means for California. From his standpoint the retrofit benefits more than just BLUS employees. The team belongs to a much larger workforce that “employs industrial designers, truck drivers, and analysts,” he explains.