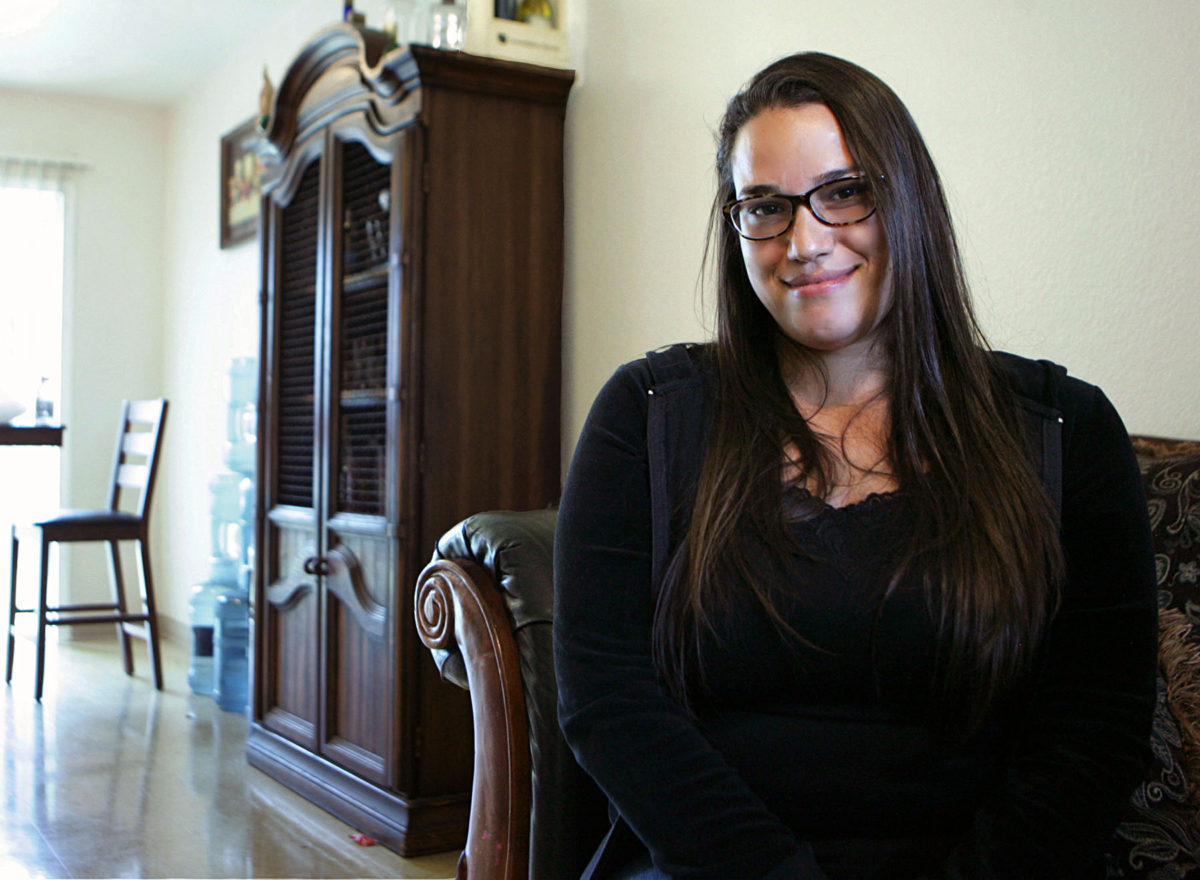 Diana Guzman and her children found the affordable housing they urgently needed at Casas de la Vina -- and now she's saving money on her electricity bill, too

Saving Money and Saving Energy in the Central Valley

Diana Guzman and her family were living on a ranch where she worked in Madera County when her life took an unexpected turn. Not only did Diana, 29, need to look for a new job and place to stay after the owners decided to sell their ranch, but she also became a single mother of two after her husband suddenly passed away.

With two boys, 8 and 5, and little-to-no income, Diana needed to find a new place to call home, and quickly. After an extensive search, Diana came across Casas de la Viña. 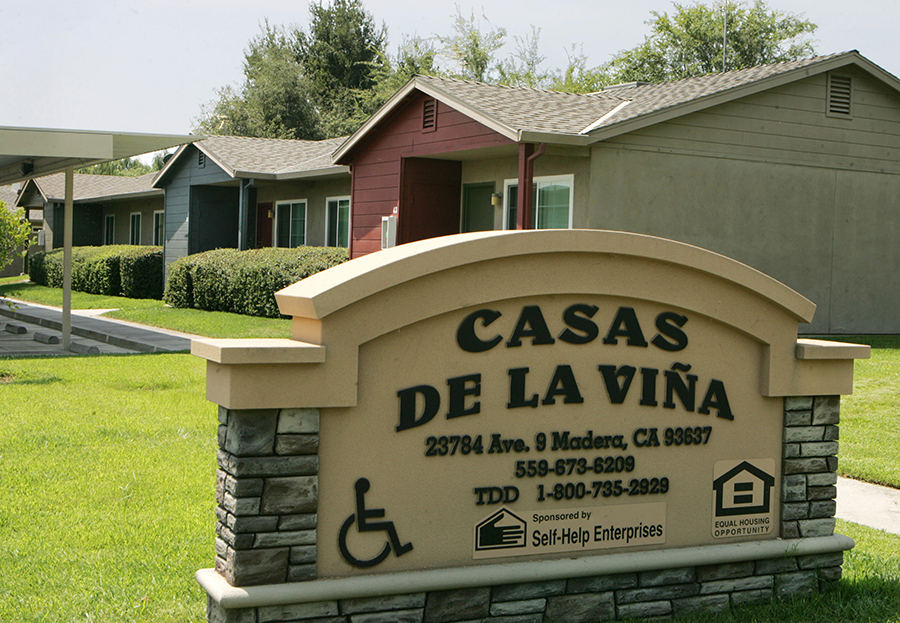 Casas de la Viña, near Madera in California’s Central Valley, provides housing for low-income residents and will soon be generating as much energy as it uses.

Casas de la Viña is an affordable apartment rental community in La Viña, an unincorporated town on the outskirts of Madera, developed by Self-Help Enterprises (SHE). SHE develops affordable apartments to serve the housing needs of low-income Central Valley residents – many of them farm workers – as they work together to build and sustain healthy homes and communities.

In between jobs, Diana urgently needed a new home with affordable rent. Casas de la Viña, where affordable monthly rent is based on the tenant’s income, proved to be exactly what Diana needed. After signing the lease, the family of three moved into a two-bedroom apartment in March 2017, paying a monthly rent of $240. And it turned out this wasn’t the only benefit of living at Casas de la Vina.

“I’m grateful for Casas de la Viña and what they’ve done for me,” Diana says. “If we didn’t live here, I would most likely be living with family,” and that would not be an ideal situation for Diana and her kids. Her entire family would be huddled in one room, giving no one the personal space they need.

Diana says Casas de la Viña has a calming nature to it. The staff and Diana’s neighbors have built a community where they show respect for one another.

“My kids love it,” Diana says. “They can go outside and play with other kids on the playground,” which is right across from their apartment.

The location also worked in Diana’s favor as there is an elementary school close by.

Protecting the environment and saving energy weren’t at the top of Diana’s agenda when her family moved into Casas de la Viña, but that’s exactly what the complex is doing. Along with other SHE properties in the Central Valley, Casas de la Viña has adopted a plan to save energy and reduce greenhouse gas emissions, which in turn, will save the residents money on their electric bills.

Through funding received last year via the Low-Income Weatherization Program (LIWP), a program that helps low-income property owners and residents of either single or multi-unit buildings to update their buildings to save energy and lower utility costs, SHE was able to upgrade five properties across the Central Valley with improvements that included solar panels and a variety of energy-saving measures. Altogether, the improvements at SHE’s complexes will cut electricity consumption by 43 percent – no trivial feat in a region where summer temperatures average in the mid-90s.

Essential funding for LIWP comes from California’s climate and clean energy laws, which charge polluters for the emissions they put into our air. By law, 35 percent of those funds must go to projects that promote clean energy and energy conservation in communities hit first and worst by pollution, climate change and economic stagnation – often low-income communities of color.

The improvements to Casas de la Viña were underway at the beginning of the year and were in full effect starting in May, with the exception of the solar panels. SHE and LIWP are currently coordinating connection of the solar panels with Pacific Gas and Electric, but residents should expect the system to be fully functioning soon.

The improvements not only benefit the property and the residents, but provided job opportunities for some folks as well. The lead contractor for installing the energy-saving measures on the property was able to use participants from Proteus, a provider of job training, education, and community services.

Along with the solar panels, the contractor and the Proteus participants converted all the lights to energy-saving LED bulbs and installed efficient new heat pump heating and cooling systems and energy efficient and soundproof windows. They also cleaned and sealed ductwork and replaced inefficient refrigerators. 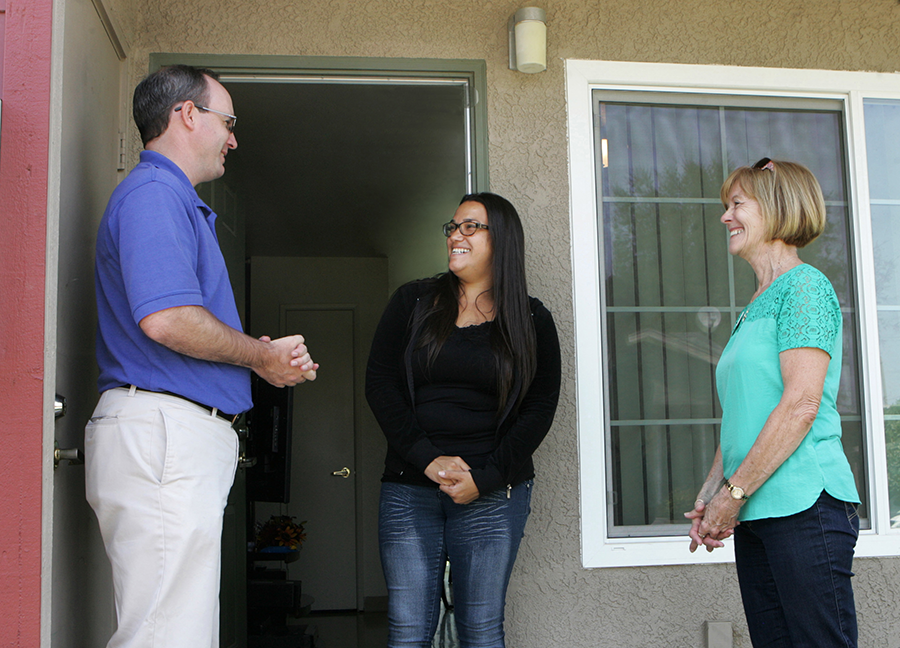 Energy saving improvements throughout Casas de la Viña are making life better for all the residents.

SHE and the residents don’t just save on energy; they also save water with the installation of low-flow bathroom faucet aerators, low-flow showerheads and heat pump water heaters.

As part of the affordable rent structure, residents receive a monthly utility allowance based on the size of their apartment to offset their gas and electricity bills and ensure that total housing costs remain affordable. If the residents go over their allowance, they pay the difference. The energy efficiency and solar improvements reduce utility bills and help ensure that residents stay within the allowance and don’t pay extra.

Diana says she has already noticed the energy she saves with improvements like the new windows, which stop heat from entering the home and keep it cooler so the air conditioning doesn’t have to work as hard.

“The improvements are really helping because it’s saving me money,” Diana says. “I’m saving up to $70 a month on my bills; I’m only paying $25 for PG&E. That makes a huge difference.”

The money she is able to save on rent and bills are able to go to other necessities like school clothes and supplies for her two kids.

Diana says Casas de la Viña and its community has been very welcoming in the short amount of time her family has been there and she could not be more grateful that they have found a home there.

“It feels nice that we don’t have to stay with family or jump around from place to place. The kids get to grow up in a stable place. It’s home.”