Finishing High School and Starting a Career in Recycling

Alan Armenta chose life in the streets of San Jose over high school. There was nobody around to make him go. For years he and his brother had bounced from place to place with his mother, nearly homeless, ever hungry. They eventually landed at his grandmother’s house, with his mom and aunt – both crystal meth addicts – crashing in and out for food and occasional showers. The sight of what his mother had become devastated him. “I was always drunk, always mad – a kid lost,” Alan recalls. “Finally, at 18, I decided that enough is enough, that I shouldn’t surround myself with this negative energy.”

The perfect remedy was right in the neighborhood – San Jose Conservation Corps and Charter School, where students are paid a wage to acquire green jobs training and operate social enterprises. The SJCC is one of 14 California Conservation Corps programs that improve our state’s environment and provide job training, many of which are funded through the California Department of Resources Recycling and Recovery – CalRecycle, which administers grant programs for beverage container recycling, waste tires, e-waste, used oil recycling and more. CalRecycle gets major funding from California climate investments – fees paid by polluters under California climate and clean energy laws that the state then puts to work cutting pollution and expanding clean energy. The Corps also transforms the lives of at-risk youth like Alan.

“Governor Brown brought Franklin Delano Roosevelt’s Civilian Conservation Corps back to life in the 1970s with the California Conservation Corps,” says Executive Director Dorsey Moore. “The Corps started in remote rural areas until people began to realize that youth disengagement was just as big of a problem in urban areas. The conservation part is about learning technical skills in natural resource management.” The non-profit urban corps now operate across the state, one in every major metropolitan area.

Yet SJCC found that its trainees, even with new skills, had a hard time getting hired without a high school degree. So the program added a charter school in 1998 to give kids like Alan, who had aged out of the public school system, another shot at high school combined with paid job training. 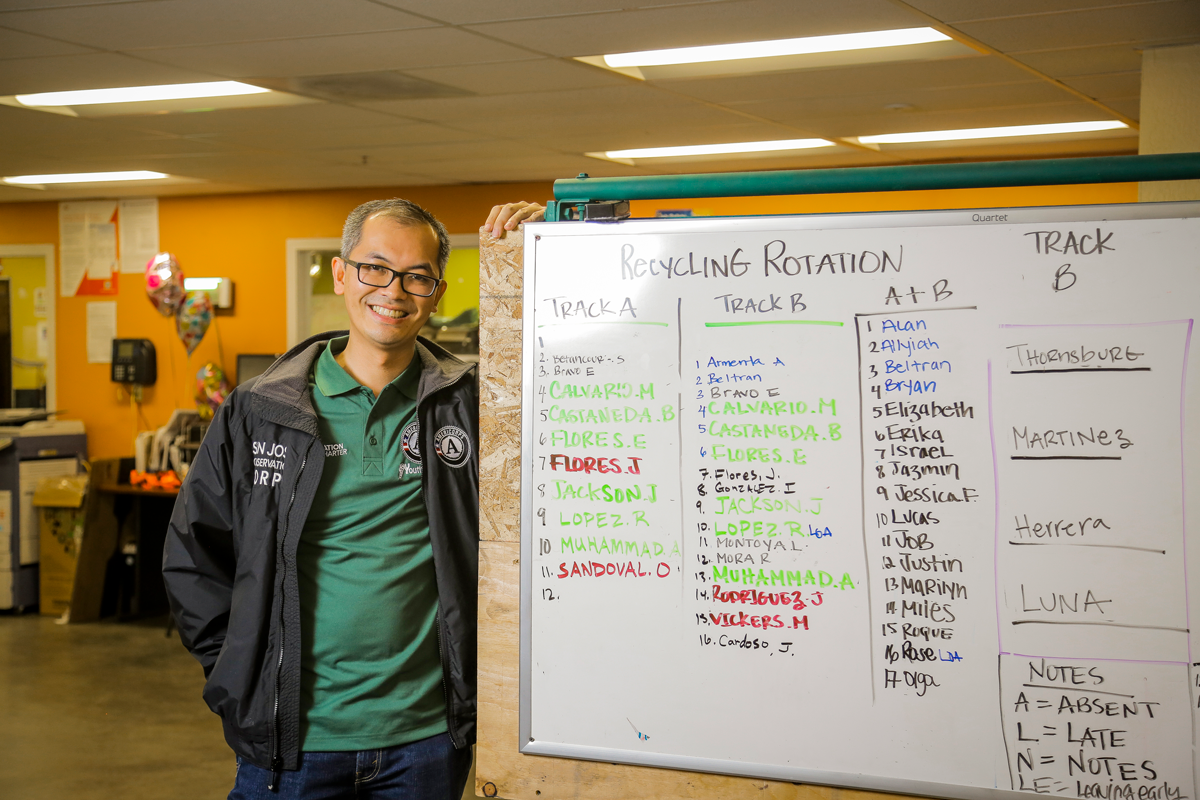 San Jose’s program, which just celebrated its 30th anniversary, has helped more than 20,000 at-risk youths catapult themselves out of poverty, using tools steeped in environmental conservation and renewable resources. “We typically work with 17-and-a-half to 27-year-olds who dropped out of high school for a variety of reasons. Some had to quit to help support their families, others had drug abuse issues,” says Alan Ha, director of the recycling program. Students spend two weeks studying for their high school diplomas, then shift to two paid weeks in one of three vocational training programs: natural resource management and community service; construction and rehabilitation of affordable housing; or recycling and environmental education training. Two weeks later, they rotate back to academics. The two weeks of paid training helps cover their life expenses for the month.

With over 150 clients in the South Bay, SJCC helps students like Armenta get licenses to drive frontloaders, sideloaders, flatbed trucks and forklifts so that they can pick up and sort through their clients’ recycling. “We also train our students on our Recycle iQ software, which we developed here and license out to other Conservation Corps,” adds Moore. They grab an iPad and enter data points that allow people to see how we are doing with waste diversion – that’s when clients are sneaking garbage in the recycling or recycling in the garbage. “We’re now training our corpsmembers in data analytics, mobile hardware and the customer-focused segment of the field,” says Moore. “We want to open up the world to them.”

Alan came to the program with zero high school credits. “Alan’s success is a story of perseverance,” recalls Ha. “He faltered many times. I even had to ask him to leave the program.”

Alan remembers it well. “I was failing all my classes, coming late or not showing up at all,” he says. He left the program to live with his father in Oregon, where he tried to attend high school but ended up in county jail for eight months.

After doing time and a lot of thinking, Alan decided to come back to San Jose and start over. “This program gives you three strikes. I already had two,” he says. “I made my third try count.” And he was welcomed right back in. Ha says, “The individuals in my program didn’t necessarily have a fair shot, given the hand and the circumstances they were dealt. What would it say about me if I gave up on them?”

Ha spends nearly 20 percent of his time teaching students the rules of workplace behavior – being punctual, following directions, and respectful communications. Another 20 percent is spent as a quasi-social worker. “If our students are housing or food insecure, we point them in the right direction to get the resources they need,” he explains.

Alan’s life circumstances colored his behavior. He was rough, careless, foul-mouthed, and prone to angry outbursts, and signed up for the program’s counseling support. “I had to talk to someone,” he says. “I told the counselor how it’s tough where I’m staying because my mom would always come around. It bothered me to see her like that,” he recounts. “She used to manage apartments. I’d just look at her and say, ‘Man, how’d you lose yourself?’”

Once Alan felt heard, things started to turn around. He showed up to class on time. He learned to control his anger. And he graduated from high school. “After all I have been through, it is the first big accomplishment I have made,” he says. “After that I just kept going.”

Now he is enrolled in the SJCC internship program at Evergreen Valley College, helping to run the college’s recycling program. Since Alan’s team’s involvement, the college has seen a 30 to 40 percent uptick in the volume of recycled materials. He aims to get a certification to become a smog specialist and get a job as a smog technician, then go to school at night to become a master mechanic.

He points to three people at SJCC who helped him turn his life around: his counselor, his former supervisor, Melissa Avalos, and Alan Ha. “He’s very nice, honest, and straightforward,” Alan says. “He can be blunt, but he has a lot of love and respect for a lot of people.”

Alan Armenta acquired his high school diploma and mastery of the forklift at SJCC. Now in college, Alan returns to campus every Friday to teach students how to operate the machine.

Alan worked hard and earned Ha’s trust and respect as a result. He is now in a leadership role in the school as a crew leader and a forklift specialist. He teaches other corps members how to operate the machine.

“The Alan I know today compared to when he first got here is entirely different – night and day,” comments Ha. “He has some real skills with the forklift, an ability to lead work with others, communicate concisely, and keep his emotions in check – this is what he needed to be successful and he got there.”