Saving Money with an Electric Vehicle in the San Joaquin Valley

As a child, Efrain Anguiano remembers seeing trash and plastic on the shores of Michoacán, Mexico brought in by the ocean. Even at a young age, Efrain knew something was not right with that picture. He saw a future that would have a bad impact on the planet. Today, with solar power and an electric vehicle, he’s cleaning the air around his San Joaquin Valley home.

In the 26 years Efrain, 51, has been in the United States, most of the jobs he worked required him to be out in the fields. It was heavy duty work, but Efrain knew he had to make a living somehow. After years in the fields, he now works as a sales agent for a local Latino magazine covering communities from Winton to Modesto in the San Joaquin Valley.

Now living in Winton in Merced County, Efrain – a kind, soft-spoken man who radiates enthusiasm for everything in his life — is doing what he can to make the planet a little greener, with a combination of clean power and an electric vehicle.

Efrain started his clean power journey two years ago when a friend told him about an incentive program that could potentially set him up with an electric vehicle to replace his old, polluting Ford Aerostar van.  He reached out to Valley Clean Air Now (Valley CAN) and applied. Funded by money raised from polluters under California’s climate and clean energy laws, these EV incentives help low-income Californians access clean transportation that they otherwise couldn’t afford.

To qualify for the incentive program, applicants must meet certain requirements. At the time Efrain applied, these included coming from a low-income family and owning a car that was a 1986 or older model (this has now changed to cover vehicles from 1999 and before).

Once Valley CAN verified that Efrain qualified, he was able to replace his old, creaking van with a 2012 Nissan Leaf that cost him just $2,600. The electric vehicle was originally priced at $12,100, but the program covered $9,500 of the cost.

“We drive it around town to take the kids to school or going to the store.”

The Leaf’s battery charge “lasts a lot of hours if driven locally,” he continued. “It will last about 50 or so miles if driven on the freeway.”

But an electric vehicle does have to be charged. That became a challenge for the Anguiano family because the nearest charging station was in Modesto, 30 miles from their home in Winton, meaning they used up much of the Leaf’s charge just going back and forth. While charging stations are expanding rapidly in California, they hadn’t reached Efrain’s community yet. But things changed for the better when GRID Alternatives in Fresno reached out to Efrain. 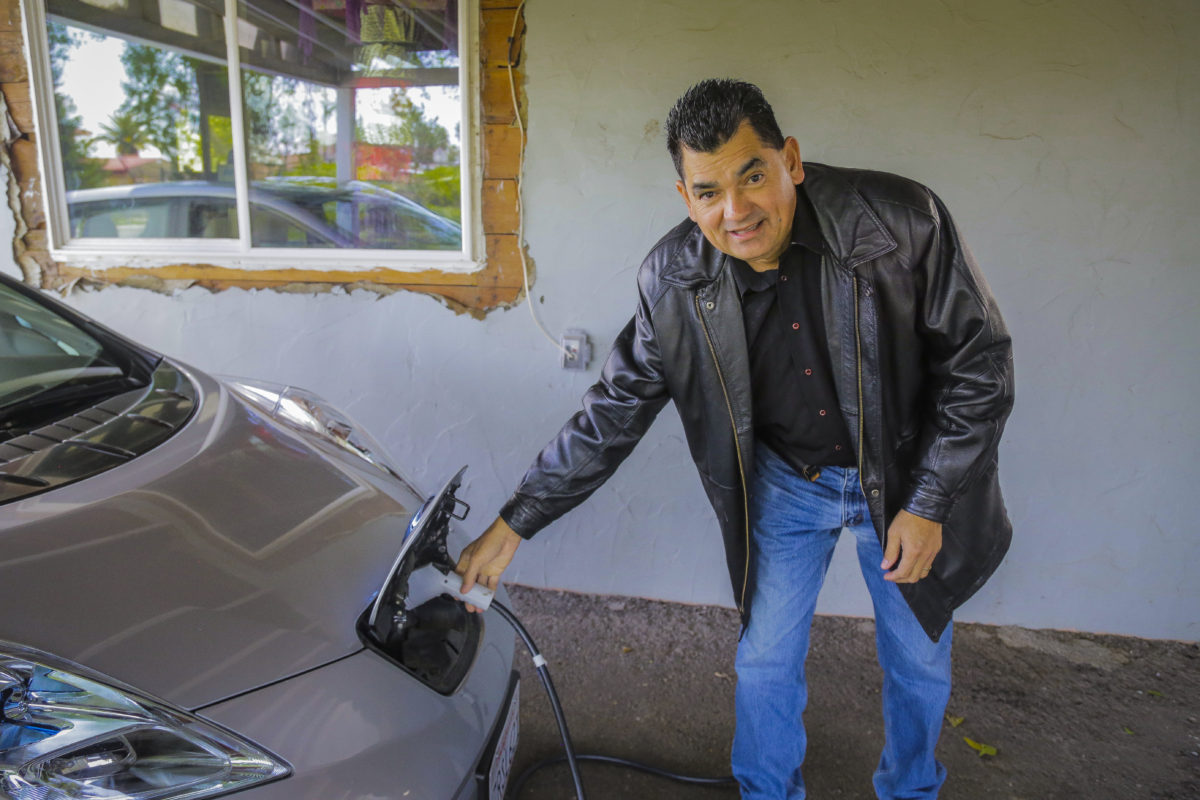 Charging Efrain’s electric vehicle is easy now that he has a home charger.

GRID Alternatives is a national leader in making clean, affordable solar power and solar jobs accessible to low-income communities and communities of color. Through its unique, people-first model, GRID puts money back into families’ pockets and reduces the energy cost burden for housing providers.

Six months after the family bought their electric car through its partnership with Valley CAN, GRID Alternatives contacted Efrain and proposed to install solar panels in their house. Efrain never dreamed of having solar panels installed in his home because he knew it was an expensive process. But with GRID and its no-cost solar installations for low-income households, it became a reality. Just like the EV rebates, the solar installation (like much of GRID’s work) was funded through money collected from polluters under California climate and clean energy laws.

“We’re saving about 75 percent off our electric bill” thanks to the solar panels. We have more money to buy things my family needs.” – Efrain Anguiano 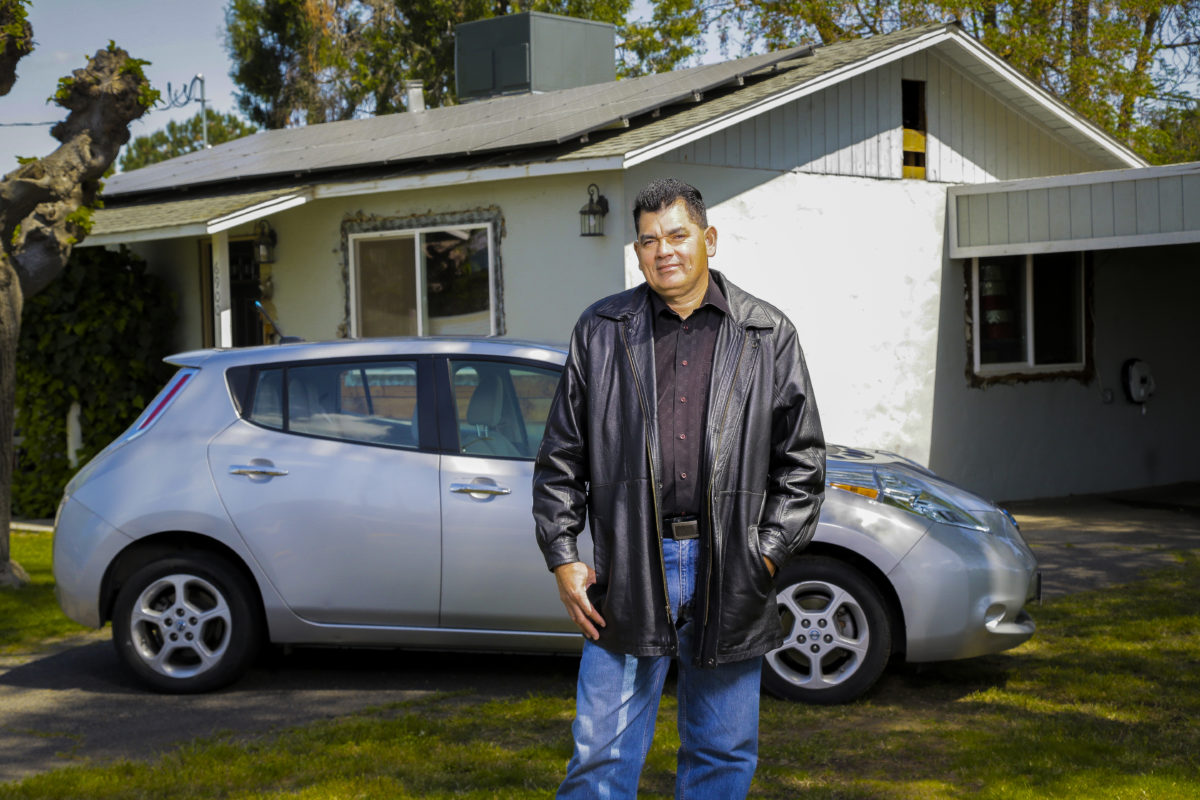 Fees paid by polluters helped Efrain buy an electric vehicle and charge it with solar power.

Most importantly, GRID Alternatives went beyond just installing the solar panels and also installed a car charger in Efrain’s house. With a home charger now at their disposal, the family no longer has to make the trip to Modesto to charge their car. The Leaf is literally powered by the sun.

Efrain added he likes using the electric vehicle because it doesn’t emit any toxic gases into the air, which in the San Joaquin Valley is a big deal.

Studies like the American Lung Association’s State of the Air report show that the San Joaquin Valley has the worst air pollution in the entire nation, with one in six children having asthma. While neither of Efrain’s two children, age 16 and 10, have asthma, the family still experiences the effects the valley air can have on someone’s health.

Efrain’s wife, Reyna, 50, has allergies that are so bad due to the combination of pollen and the valley’s air pollution that she has to see a specialist for treatments. Reyna has been seeing her allergy specialist for two and a half years now.

Efrain knows driving an electric vehicle won’t fix the San Joaquin Valley’s air problem by itself, but hopes it can be the start of better future.