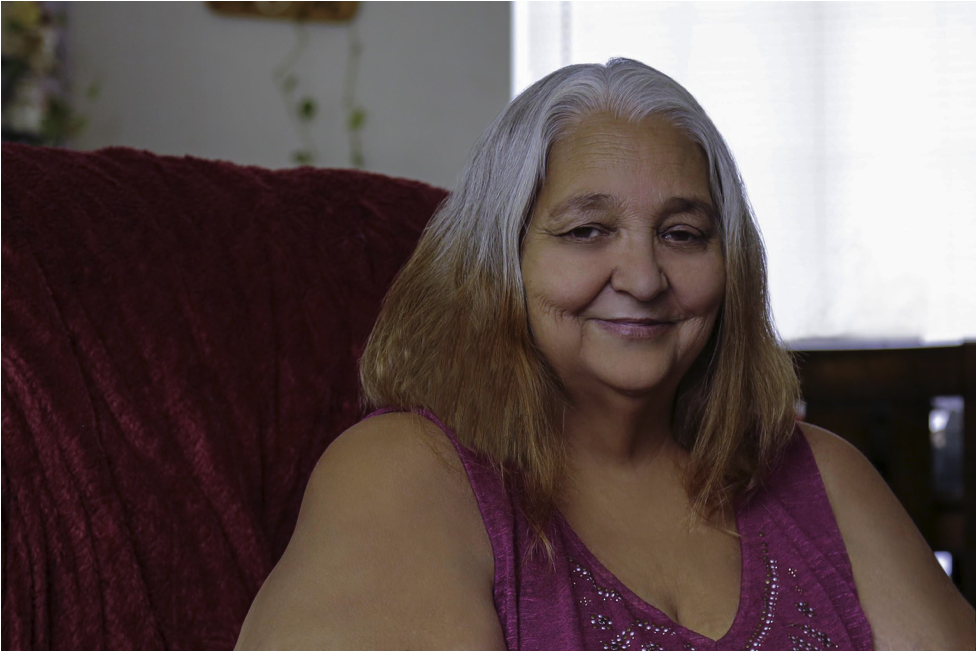 Elaine Cardenas spent a majority of her life in the workforce. She worked in retail for 30 years, and eventually opened her own business — a candy shop — in Florida for 8 years. Elaine even spent some time in the healthcare industry as an in-home health caregiver, all while raising her daughter and son.

But now her day-to-day life is much different than it used to be.

Elaine, 60, was born in Turlock, California and spent her childhood in the nearby town of Livingston. After living in Florida for more than 10 years, Elaine returned to the Central Valley in 1994, and now resides in Merced.

In 2010, Elaine fell ill. Her condition gradually worsened over the years, and she now lives with chronic obstructive pulmonary disease (COPD), arthritis, high blood pressure and congestive heart failure. She uses an oxygen tank that helps her breathe and an electric scooter to help her move around.

“There’s not much for me to do because I’m on oxygen 24/7,” says Elaine about her day-to-day life. “I get out of the house for doctor appointments and tests. I do go out to go grocery shopping and to go to the park with my grandkids. But most of the time, I’m here at the house.”

With many hours spent at home, Elaine needed her house to be energy efficient and in the best condition it could possibly be. And the house definitely had some problems, so she reached out to Merced County Community Action Agency.

“I’ve been at this house for 13 years,” says Elaine. “It needed some upgrades.”

Community Action Agency assists low-income qualifying families to pay utility bills, install energy efficiency upgrades and also makes small repairs to people’s homes at no cost. The families could qualify for a broad range of items, depending on what the agency sees when they go out to the property.

Elaine connected with Community Action Agency four years ago when she needed help paying her electric bill and the agency helped Elaine with her payments.

She stayed in touch with the organization and continued to participate in different programs Community Action Agency offered.

But it wasn’t until late 2017 when she was referred to the weatherization department. As Low-Income Home Energy Assistance Program providers, Community Action Agency receives federal funds to administer the program in the Central Valley.

LIHEAP does great work, but more Californians need this sort help than LIHEAP has been able to reach. Happily, California is now helping thousands more families with its Low-Income Weatherization Program, which has programs for both single-family homes like Elaine’s and multi-family apartment complexes.

Funding for LIWP comes from California Climate Investments, a statewide program that puts billions of cap-and-trade dollars — money paid by polluters under California’s climate and clean energy laws — to work reducing greenhouse gas emissions, strengthening the economy and improving public health and the environment — particularly in disadvantaged communities. Taken together, LIHEAP and LIWP help huge numbers of low-income Californians save money and energy, while reducing air pollution for all of us and helping fight climate change.

After meeting certain income requirements (based on the number of people in the household and the gross income), Elaine qualified for several energy efficient upgrades to her home.

But Elaine said the most useful upgrade was having four of her windows replaced with new, energy efficient ones.

“I had windows that needed to be replaced because the wind would come through during the winter,” says Elaine. “They were old windows. They wouldn’t open up. They couldn’t stand up. They would need to have sticks to keep them up.” 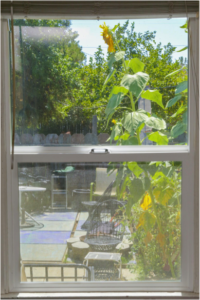 “The cool air would come right through the window in my room,” she continued. “I’d end up getting sick and would have to go to the hospital to be treated for pneumonia. It was a blessing to have new windows put in.”

The new windows are insulated and double-pane. In the Central Valley, where it’s hot in the summer and cold in the winter, this made a difference on Elaine’s electric bills. She saw savings of 30 to 40 percent.

The program installed new upgrades in the bathroom too, replacing the toilet and showerhead, accommodating Elaine’s and turning it into an accessible bathroom appropriate for her disability, as well as being more energy efficient.

It took three days for installation to be completed, but the wait was worthwhile as the end result left Elaine ecstatic about her upgraded home. “I was tickled pink,” she says.

Elaine says if it weren’t for Community Action Agency, she doesn’t know if she would have ever gotten the things she had replaced taken care of.

Elaine encourages everybody in Merced County to go to Community Action if they ever need assistance. “You could be low-income or middle class, and they will help you depending on your needs,” Elaine says. “They have always been very helpful, and if they can’t help you, they will send you to somebody else that can or somebody that’s a little bit less expensive. But you will get some help. They’re good people. It’s a very good place.”

And with one less worry on her shoulders, Elaine hopes this will allow her to do the one thing she wants to do more of — spend more time with her two grandkids at the park.