At first glance, Danny Alvarez isn’t your typical department lead. Tattooed cursive letters arch over his right eyebrow, a black spider sits near his left temple, and outlined crosses rest below each eye. His neck is marked with large block letters and thick black lines peek out through his close-cropped hair.

The tattoos are remnants from his days as a gang member in his hometown of Lancaster, California. Now 34 years old, he’s left the gang life behind and simply wants to be a stable, loving provider to his three daughters. But face tattoos tend to put a damper on employment opportunities, as does his status as a formerly incarcerated person. Luckily, the hiring team at electric bus assembly company BYD — which stands for Build Your Dreams — didn’t bat an eye at his physical appearance, nor his record.

“I have a history of, you know, gang associations and selling drugs and all of those things that come along with [being in a gang],” Danny says. “I’ve been to prison for firearms and drugs.”

Danny was last imprisoned for four years for gang-related crimes. During his final stint, he realized that he was ready to turn his life around.

“The last time I was [in prison] it just wasn’t really what I wanted to be doing and I just needed that one chance out,” Danny says. “This was part of that chance, this company.”

Research shows that the formerly incarcerated face heightened barriers to employment, with up to 75 percent unemployed a year after their release. Danny struggled, working countless odd jobs and taking any and every position he could to get by. Before this electric bus building job, he worked sporadically for a plumbing company, a job he found neither fulfilling nor stable.

Getting hired at BYD proved surprisingly simple. The company makes a point to employ people who are formerly incarcerated or face other barriers to employment. Danny merely handed in an application, went on an interview, and was quickly hired, with no assembly line experience to speak of. About 18 months later, he’s changed departments, been promoted, and received a pay increase.

BYD is the world’s largest electric vehicle company. Founded in China in the mid-1990s, the company began its expansion to the U.S. in 2008. BYD aims to create clean energy vehicles that are as dependable as their gas-guzzling counterparts.

To date, BYD has outfitted the world’s streets with more than 40,000 plug-in electric buses. About 200 are in circulation across the U.S., with orders for about 500 more. The buses are being used for public transportation in Denver and on Martha’s Vineyard, for shuttle services at the Kansas City International Airport, and as garbage trucks in Palo Alto. Many of BYD’s buses are on the road in its home state, with buses purchased for the local Antelope Valley Transportation Authority and UC San Francisco.

California’s use of clean energy buses and trucks is growing thanks to California Climate Investments. Under California’s climate and clean energy laws, the state charges polluting companies and then funnels that money into projects that reduce greenhouse gas emissions while also socially and economically benefitting Californians. Last year BYD received $9 million in funding from California Climate Investments, which helped outfit Los Angeles, San Bernardino, and Fontana with 27 new electric trucks.

BYD buses are designed to travel up to 150 miles with a full passenger load on a single charge. However, while many transit groups have embraced BYD, the company has received some criticism. A story published by the Los Angeles Times in May alleges that the buses have fallen short of their mileage goal and have required more mechanical service calls than traditional buses.

“Criticisms of BYD’s performance have left out key facts and ignored balance and fairness,” BYD responds. Company records show that many maintenance calls had little to do with malfunctioning equipment and more to do with operator error or passenger issues (such as a passenger urinating on the bus). Officials also say that their testing has shown that the buses can travel an average of 163 miles per charge and estimate that battery capacity will improve by five to 10 percent each year over the next five years.

A single zero-emissions bus eliminates roughly 1,690 tons of carbon dioxide over a 12-year period—the equivalent of taking 27 cars off the road, according to the U.S. Department of Transportation.

“We’re trying to change the planet for the better,” says Willy Solorzano, an organizer with SMART (Sheet Metal, Air, Transportation) Local 105, the union which represents BYD workers. “My son is four months old—going to be five months pretty soon—and if I can leave this place better than it is right now—for my son—you know, I’m all for it.”

Willy helped make sure that, in the course of saving the planet, BYD doesn’t leave its workers behind. In January 2018, BYD workers signed their first contract, which solidified their position with the union and provided wage increases and training opportunities.

“BYD steadily has done a great job of taking care of the employees,” says Willy. “The company realizes that the more skilled workers that they have, the better they’re going to perform and the production is going to go up.”

Because BYD’s work is at the forefront of technology, many of its workers come in without relevant experience and it’s up to the company to give them the skills they need for electric bus manufacturing.

“I remember when I first walked in here and they told me you have to have safety glasses, I was almost overwhelmed because there were so many tools and people and I was like, ‘whoa, I don’t know…’” Danny says, his eyes widening as he recalls his former unease. It’s easy to see why. The 450,000 square foot facility is filled with about 90 buses in various stages of completion. Pulleys hang from the ceiling, motorized lifts zip by and hundreds of employees work diligently with noisy power tools. 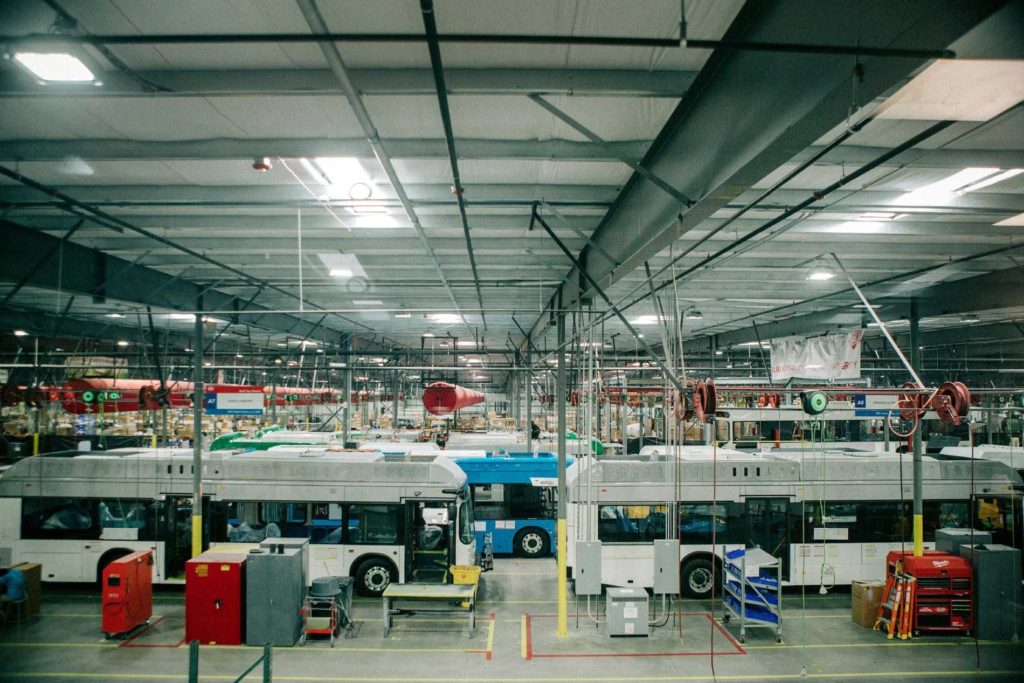 But the facility is clean and comfortable, the workers amicable and knowledgeable, and after three weeks of on-the-job training, Danny was ready to work. The company’s willingness to train its workforce allows it to hire formerly incarcerated people like Danny, who just needed the chance to prove himself.

BYD has committed to ensuring that 40 percent of its eventual workforce is comprised of communities that are typically underrepresented in manufacturing, including people like Danny, who are coming out of incarceration, along with veterans, women, and people of color. Currently, 85 percent of its Lancaster team is non-white. The company also makes an effort to hire locally, with most workers. living in Lancaster and neighboring Palmdale. Many employees can even walk to work.

While the short commute is a nice perk, Danny truly loves the work that he does. After starting as regular employee, fitting flooring and carpeting on the buses, he was promoted to a department lead and now oversees the installation of seating, mirrors, and handrails. He likes to move around the manufacturing floor as much as possible and enjoys seeing all the pieces come together to create a completed electric bus.

“[Danny’s] the type of guy that will go the extra mile to get things done. That’s why he’s a lead,” Willy says, noting that the company’s hiring policies offer every potential employee equal chances to succeed.

“Once you give them that chance it’s up to the individual to see how far they want to take it and this guy right here,” Willy says, motioning towards Danny, “is taking it to the sky.”