Rey León at the launch of the Romualdo M. & Imelda C. León Community and Mobility Center in Huron, where the Green Raiteros transportation service is housed.

When Rey León saw a transportation issue in his Fresno County hometown of Huron, California, he jumped at the opportunity to bring a cleaner, more helpful transportation service to its residents.

Being a rural community, Huron is miles away from the nearest hospital, specialized doctors, and social and legal services. As a low-income, immigrant farmworker community, many of its residents don’t have access to cars.

A regional transit system is available, but it also serves surrounding rural communities on top of Huron. With all the stops the bus needs to make, the 53-mile drive from Huron to Fresno can take up to three hours.

Besides public transit, Huron had another, less structured transportation service available — raiteros, or simply “a person who gives rides” — an informal rideshare system that has been used in rural Central Valley communities for decades. Drivers are retired farmworkers who take folks who don’t have access to cars or public transit wherever they need to go — free of charge or with a fee, depending on the raitero. But sometimes those fees can get unreasonably high.

Huron resident Catarino Gutierrez said transportation service wasn’t easily accessible for him and his wife, Josefina Gudino, especially when they needed it most.

Catarino needed surgery on both eyes and had to rely on an unreliable transportation service that his insurance covered to get him to appointments in Clovis.

“They wouldn’t always show up, and I missed a lot of my appointments,” Catarino said through an interpreter. “A couple of times, they left me outside waiting for them at 4:30 a.m. when I needed to be in Clovis at 6 a.m.

“If that agency didn’t show up to take me, I would have to ask a friend and it would cost $100 for them to take me,” he continued. “I couldn’t afford that, so I wasn’t able to go.”

Rey, a long-time community activist and current mayor of Huron, saw the need for a reliable, accessible transportation service.

“I would always ask about why isn’t it possible to be able to streamline transit from Huron and other farmworking communities to the city,” Rey said. “Their response was always the same: ‘There’s not enough resources. It’s costly.’”

Determined to find a solution, Rey persevered. When new information and technology around electric vehicles and charging infrastructures became more readily available, he began thinking about a more cost-effective and green solution. “I thought, ‘What if we pursued combining the raiteros with electric vehicles?’” he said.

And with that thought back in 2013, Green Raiteros was born.

This rural ride-share service builds on the indigenous model that has been sustainable for ages in the Central Valley with an added twist — it uses electric vehicles to reduce pollution and greenhouse gasses as well as to lower operating costs. It was developed by The Latino Equity Advocacy & Policy (LEAP) Institute, a nonprofit Rey founded and oversees, which works with Valley communities to achieve environmental, climate and economic justice.

To get Green Raiteros off the ground required funding, but Rey and his team had difficulty securing funds through the California Air Resources Board. Not only did they lack technical assistance and resources needed to create a competitive application for a new operation, CARB was still learning about the value of projects like this and developing a culture that recognized and supported efforts in needy communities like Huron.

Multiple grant proposals and applications had no luck. But in 2016, Rey’s luck began to change when he received some assistance from friends at The Greenlining Institute.

With help from Greenlining plus the Shared Use Mobility Center and the Center for Energy Efficiency and Renewable Technologies, Rey and the Green Raiteros team were able to secure funding from a 2012 settlement between NRG Energy and the state of California. Addressing a dispute dating from 2001, the settlement, which included Greenlining as a consultant, required NRG to invest $102.5 million on electric vehicle charging stations across the state and $4 million on projects to increase awareness of the benefits of electric vehicles while creating opportunities for low-income communities to gain access to EVs.

“The company reached out on a regular basis to help them figure out how to spend the money,” Joel said. “In 2016 … they came to us and said, ‘Hey, we still have this $4 million not being spent. Do you have any idea how to spend it?’”

Rey was able to secure $519,400 to get his program off the ground, and in October 2018, Green Raiteros officially launched in the town of Huron and surrounding communities like Coalinga and Avenal. 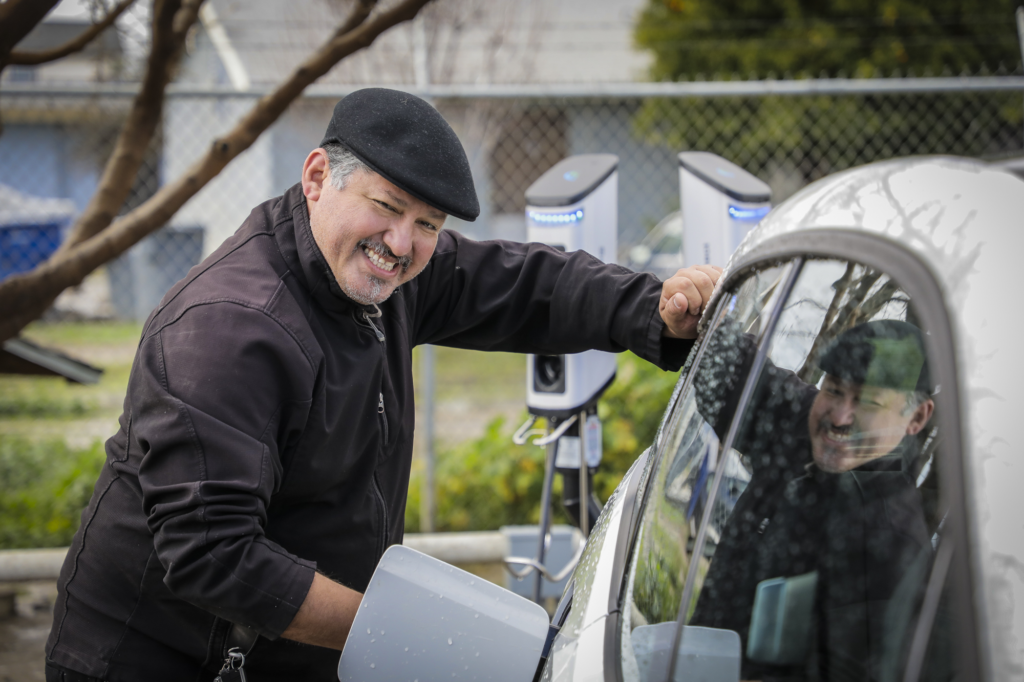 Housed in a former diesel mechanic shop that the team has transformed into a two-story office space and maintenance center — now called the Romualdo M. & Imelda C. León Community and Mobility Center — Green Raiteros has two electric vehicles available — a BMW i3 and a Chevrolet Volt — a couple of charging stations, and several raiteros making trips to neighboring cities such as Fresno, Clovis, Hanford and Lemoore.

The program now averages about 25-30 trips a month, and has occasionally had to turn down ride requests due to a lack of vehicles. Rey hopes to add two more cars and more raiteros in the near future.

Community members like Catarino are ecstatic about finally having a reliable transportation system. Thanks to Green Raiteros, he was finally able to make it to his appointments and have his eye surgery.

“They took me six times for appointments for my eye surgery,” Catarino said. “If they weren’t there, I would’ve had to pay $600 for a regular raitero to take me. I would tell myself that I felt better so I wouldn’t have to pay that expense. But with Green Raiteros, I was able to go to the check-ups to make sure everything was good.”

Green Raiteros’ success stems from the collaborative efforts of Rey and its partners. Like Rey, there are folks in other rural areas across the state with great ideas, but who lack the resources or the information to even know where to begin.

“There are Rey Leóns everywhere in the state,” said Alvaro Sanchez, Greenlining’s Environmental Equity Director. “Local climate champions who are really passionate about what they want to do in their community, but just lack that basic level of information. Many of them have never been able to pursue state level funding, which is very complicated to get through and does really require knowing how to navigate that space.”

To help make the process more accessible, California passed two bills that will help people like Rey who want to start clean transportation rideshare programs like Green Raiteros in their own community. SB 350, or the Clean Energy and Pollution Reduction Act of 2015, and SB 1072, or the Regional Climate Collaborative Program.

SB 350 directed the California Air Resources Board to “conduct a study of the barriers low-income communities face to accessing clean transportation options and offer recommendations to overcome those barriers,” Joel said. SB 1072 directs the state of California to address information and technical assistance gaps in California’s neediest communities. The Regional Climate Collaboratives will provide basic levels of technical assistance such as grant writing and budgeting, helping break down barriers that impede access to resources. These laws will help California support projects like Green Raiteros — and help them grow. 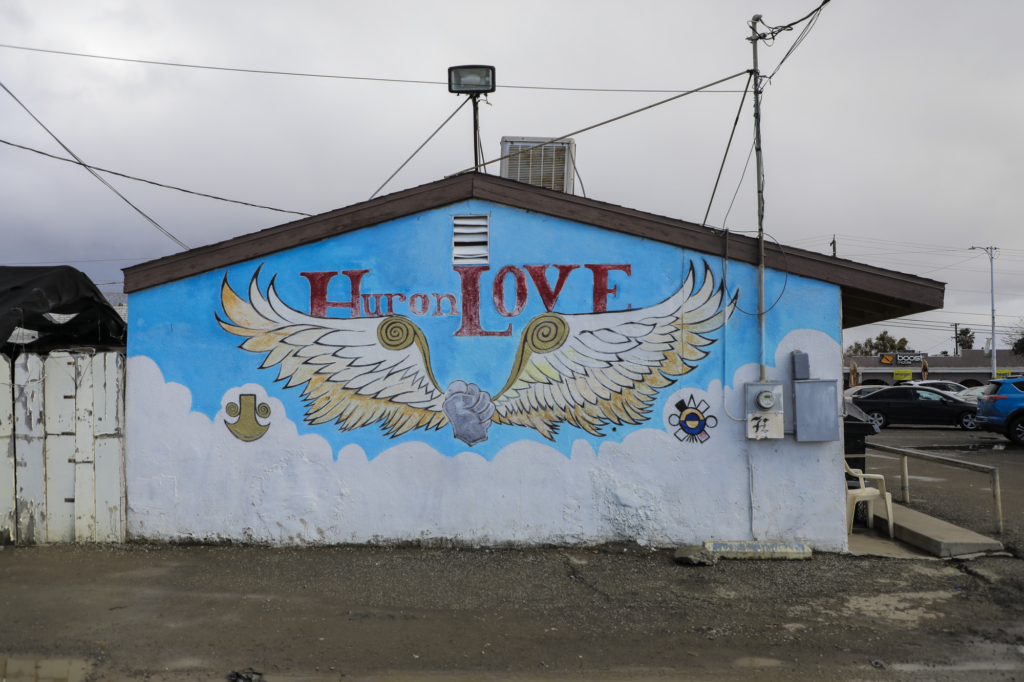 The town of Huron isn’t wealthy, but its residents are proud of their community.

“We’re in the very beginning of it all,” Rey said. “I think it’s going to keep evolving in a very special way.” However that plays out, his focus will remain: “Empower more people, help people stay healthy. Make society better.”