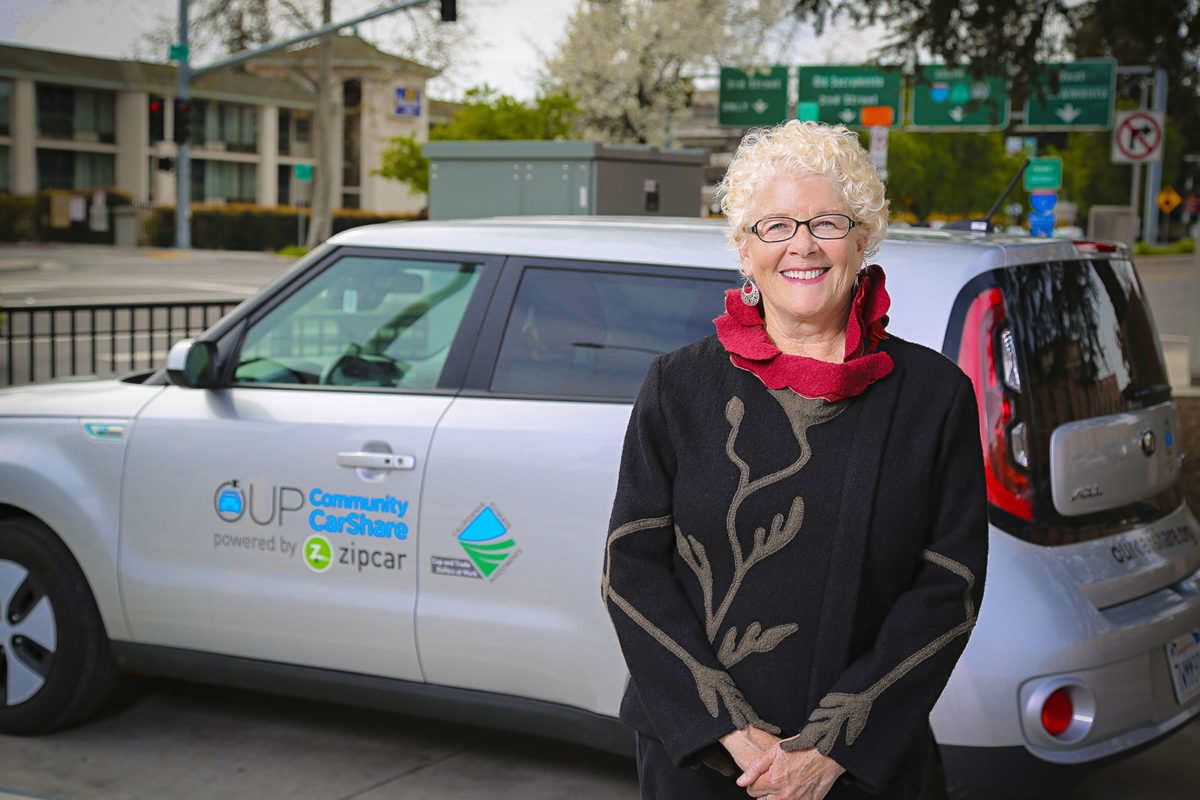 Two years ago, Susan Brown had the bright idea to start carsharing with a neighbor in her Sacramento affordable housing community, named Edgewater. She had previously owned a car but the costs were prohibitive. “I wasn’t able to hold onto it,” she said. “It’s expensive to own a car.”

The sharing arrangement went sideways, though, when her neighbor took over the car and elbowed Brown out. She tried public transportation for shopping and trips to her doctor, but it didn’t work for her. “Because of my PTSD [Post Traumatic Stress Disorder], I would get confused and lost,” she recalled. “I spent seven hours one day trying to go to the doctor.” She used a monthly bus service to Walmart for seniors, but her diet suffered, and so did her health.

“I got so depressed. I put on weight,” said Brown, 67. “I felt completely trapped. I couldn’t afford Uber. When you’re on a fixed income, it’s hard just to come up with the rent.”

Then in May 2017, salvation came when she went to a presentation on a new carsharing program for residents of Edgewater and two other affordable and senior housing communities in Sacramento, Alder Grove and Lemon Hill. Called Our Community CarShare, the program is a pilot designed to help people like Brown get around town—but with non-polluting electric vehicles. it was made possible by legislation called the Charge Ahead Initiative, also known as SB 1275, authored by Senate President pro Tem Kevin de León, which required the California Air Resources Board to create programs that would increase access to electric vehicles for individuals impacted most by poverty and pollution. The $1.3 million initial funding for the pilot comes from the state’s Greenhouse Gas Reduction Fund, created with monies derived from the cap-and-trade program to reduce fossil fuel pollution. And for eligible low-income residents, the pilot program has another benefit: free membership.

“I was so excited and so grateful,” said Brown. “I signed up immediately.”

Our Community CarShare sprang from a collaboration among key agencies with the dual goals of aiding low-income residents and reducing air pollution. The Sacramento Metropolitan Air Quality Management District submitted a funding proposal to the California Air Resources Board for a year-long pilot, in collaboration with the city, the Sacramento Municipal Utility District (SMUD), the Sacramento Housing Redevelopment Authority, Mutual Housing and Policy in Motion. Zipcar, one of the first carsharing companies, provides the vehicles—electric Kia Souls—and manages the program.

“It was kind of a labor of love that came together among the partners,” said Steffani Charkiewicz, associate air quality engineer and lead staff on the carsharing pilot. “We had many conversations about what we could do and how to do it. The city and SMUD had already installed charging stations at the Sacramento Rail Station, so they became very central.” 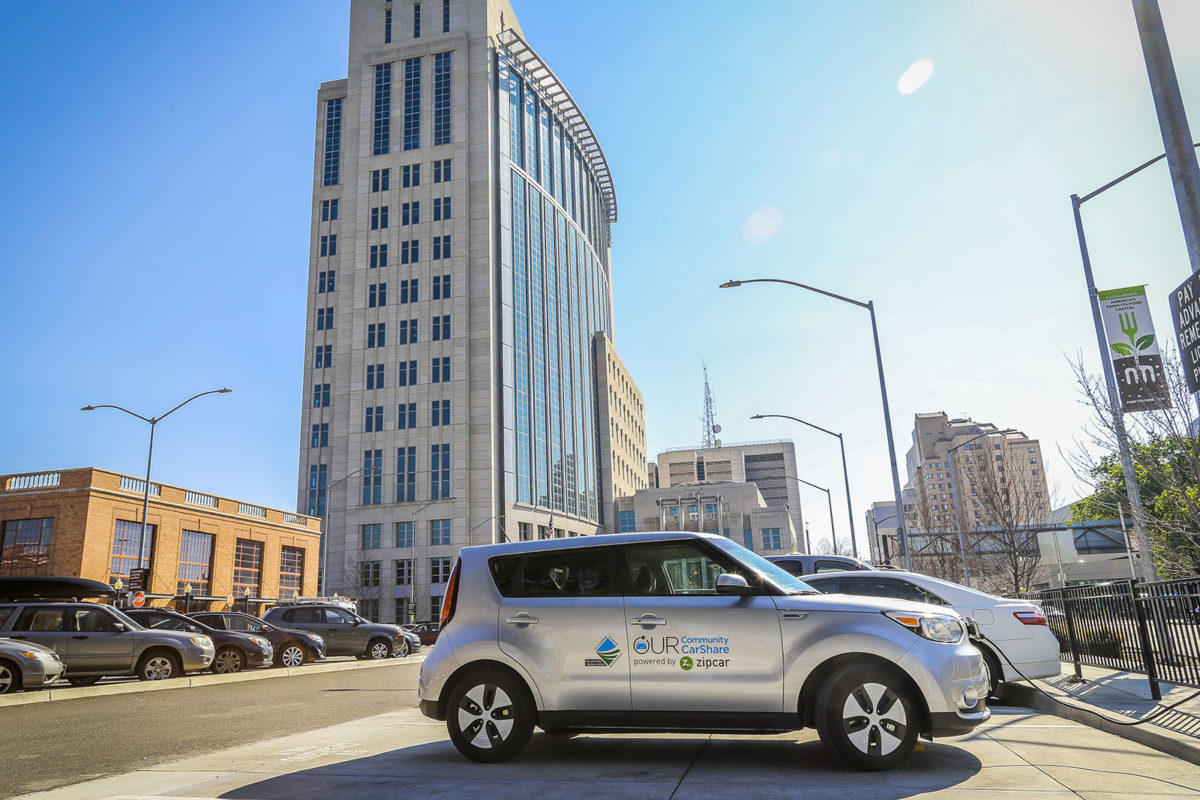 One of the electric Kia Souls used by members of Our Community CarShare in Sacramento.

After considering a citywide electric carsharing program, the partners soon realized that was too ambitious and narrowed their focus to the three affordable housing communities. There are a total of eight cars, with charging stations and two cars based at each community and at the Sacramento train station. In early March, a fourth community, Riverview, joined the carsharing pilot. Its residents use the cars at the nearby train station.

CarShare members must reserve a car through a phone app or online at the program’s website. Cars are not available between 12 a.m. and 4 a.m. to ensure that they are fully charged. There is a three-hour maximum use and cars must be plugged in to charging stations when returned so they are ready for the next member.

“It not only puts clean vehicles on the road, but it gives access to them to people in underserved communities,” said Bill Magavern, policy director at the Coalition for Clean Air, which worked with The Greenlining Institute, Communities for a Better Environment, Environment California, and the Natural Resources Defense Council on the Charge Ahead law. “It’s been helping low-income folks get to medical appointments and the grocery store and do it without polluting the air.”

Magavern said recent air monitoring data from the Sacramento Air Quality Management District found that toxins from fossil fuels were higher in environmental justice communities—typically low-income communities of color—than in higher-income areas. That pollution, which puts residents at greater risk for a variety of health problems, stems directly from land-use decisions that sited heavy traffic routes closer to communities of color. “So it’s appropriate that we’re channeling these services to communities that suffer from bad decision-making,” Magavern said.

The Greenhouse Gas Reduction Fund has up to $22 million for carsharing pilots for the current fiscal year, according to Magavern, which includes $5 million to expand the Sacramento pilot and another one in Los Angeles.

As the carsharing pilot approaches its one-year mark, Charkiewicz said the partners are upbeat about the program’s success, and plan to add six more cars and two more housing communities during the second phase. They’ve also learned from some of the unanticipated challenges in getting it off the ground. Free memberships were available to the first 300 people who signed up, but only 149 residents have joined as of March 2018. All that’s required are a valid driver’s license and clean driving record, but many potential participants need lots of convincing, she said.

“Some of it is a fear of hidden costs or a fear of the technology,” Charkiewicz said. “Some fear giving up private information to a government agency. We assured them there was no tracking mechanism on the cars. We spent a tremendous amount of staff time educating people.”

John Tolliver, 71, needed no convincing when he saw flyers promoting Our Community CarShare in the Edgewater community, where he has lived for two years. He’d been depending on his niece’s car to get around and when it broke down, he was stuck using cabs. “I’m on Social Security,” he said, “and it was costing too much money.”

Proudly unplugged from computers and social media, Tolliver said he got an email account “just so I could sign up for CarShare.” He uses it about 10 times monthly, often to visit the cemeteries where family members are buried, as well as for doctor appointments and shopping. “If they quit doing it, it would hurt,” he said. “If they started charging $9 or $10 an hour, I’d have to cut back on driving.”

The CarShare creators are acutely aware that members like Tolliver and Susan Brown have come to depend on the program, especially because it is free. Happily, it appears that funding will continue through the next year at least and this will remain a priority program for California in the coming years. Clean carsharing represents a growing wave in clean, affordable transportation in California.